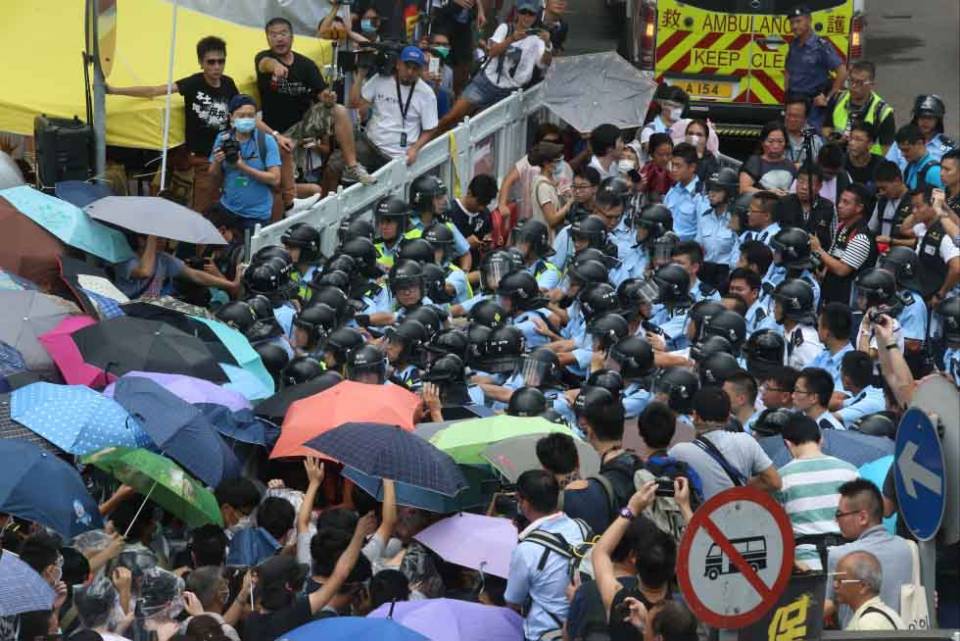 Officers fired at least two round of tear gas on Harcourt Road after intermittent attempts to move crowds away from the area with pepper spray were unsuccessful.

The ranks of the movement swelled to as many as 30,000 protesters as protests moved to two fronts, forcing the closure of one of the cityâ€™s main thoroughfares to traffic.

As the scenes of protest shifted, hundreds of demonstrators gathered on the ground floor of the Admiralty Centre. Police used pepper spray during clashes with protesters there after four police vans carrying more than 100 officers arrived to confront the growing crowd. “Itâ€™s all about our pursuit of democracy. Beijing now sees it; the world now sees it; [Chief Executive] CY Leung, do you see it?â€

Earlier, protesters equipped with masks, goggles and umbrellas to fend off pepper spray manned barricades and prepared to dig in as police warned them to leave the area for the sake of their safety.

Protesters should â€œleave now, for the sake of their personal safety,â€ police said at around 2pm.

But Tai encouraged the crowd to â€œstand firmâ€ in the face of police intervention, in an emotionally-charged three-minute speech. 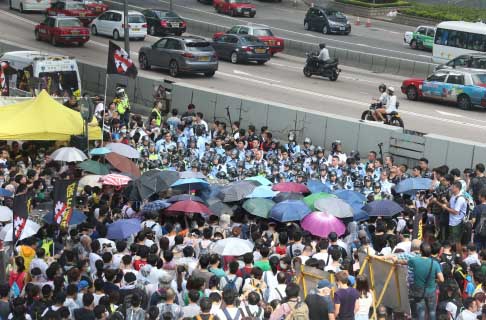 â€œFighters, get ready for this banquet. I believe more banquets will follow. See you again on the next banquet!â€ he said referring to possible further Occupy demonstrations.

â€œFor many people here, myself included, we will soon have a first taste of pepper spray and police officers hauling you away, but donâ€™t be afraid nor humiliated.â€ 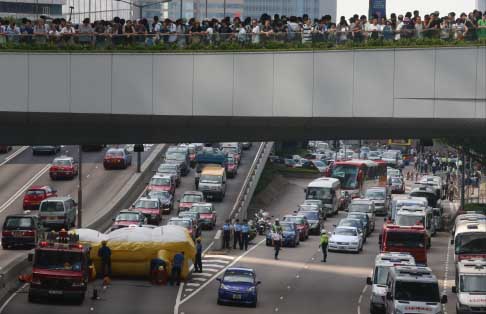 In his first address since student protests began on Monday, Leung announced that the government would soon start a new round of consultations of electoral reform. However, a statement released by the government reiterated that Beijingâ€™s stance on electoral reform for the city was legally binding and Leung urged members of the public not to join the protests.

Scuffles broke out shortly before noon between demonstrators and police as protesters attempted to carry audio equipment into the protest zone. At least three pan-democrat lawmakers, including Albert Ho Chun-yan, Dr Fernando Cheung Chiu-hung and Emily Lau Wai-hing, were taken away by police after they were warned that they would be charged with perverting the course of justice if they continued their efforts at moving the equipment. Alliance for True Democracy convenor Joseph Cheng Yu-shek and former Democratic Party chairman Dr Yeung Sum were also taken away. Occupy organiser Dr Chan Kin-man called on the protesters to intercept or block any police operations after the legislators were taken away.

Calling it â€œprogressive non-violent resistanceâ€, Chan said: â€œIn case of conflicts, please raise both of your hands to show that you have no intention to attack law enforcement officers.â€ He reminded protesters to abide by the principles of peace and non-violence at all times. 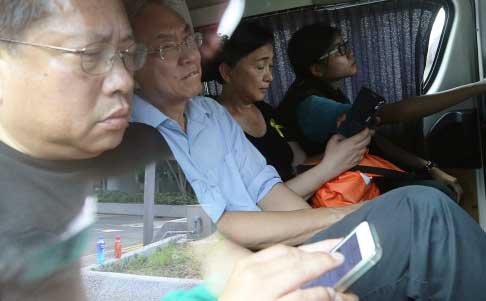 While some students were delighted with the news that the sit-in had started, others said Occupy had hijacked their movement after a week of protests that culminated in 200 protesters storming “Civic Square” on Friday night, the forecourt of government headquarters in Admiralty,

A group of City University students appealed to the Federation of Students to clarify that the event they were protesting at was not Occupy Central.

â€œWe are here to support the federation and the student boycotts. Not everyone here wants to get arrested by police,â€ said Karma Kong, 25. â€œThey [Occupy] have hijacked this movement.â€

University of Hong Kong studentsâ€™ union president Yvonne Leung-Lai-kwok said the student movement would continue as it had for the past two days.

â€œThere seems to be some wrong messages that we are occupying Central immediately, but to continue this movement we must stay here, at least until Alex Chow [Yong-kang], Lester Shum and Joshua Wong [Chi-fung] return safely,â€ she said, referring to the student leaders arrested and detained for more than 30 hours after breaking into Civic Square. 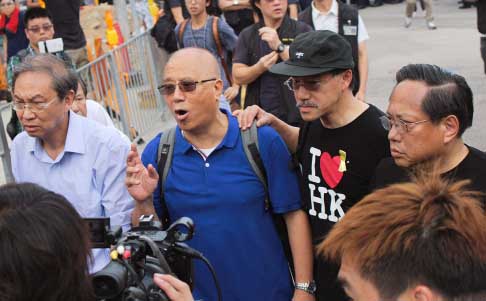 Scuffles broke out on Sunday morning outside the Legislative Council as a policeman let out a yell before running into the protest zone on Lung Wui Road. Students blocked his path and a dozen other officers arrived to calm him down.

Civic Party leader Alan Leong Kah-kit said at least 18 pan-democrat lawmakers would take part in the Occupy sit-in, including himself. Some other pan-democrats would help with legal or medical aid, he said.

Next Media boss Jimmy Lai Chee-ying, who is under investigation by the Independent Commission Against Corruption over donations to pan-democrat politicians, said he expects arrests to be made.

â€œThatâ€™s why weâ€™re occupying Central. This is about making sacrifices. Without sacrifice, we cannot have civil disobedience,â€ he said, adding that he would try his best to participate in the movement as much as possible.

â€œThe most important thing is that we use love and peace. The only power we have is moral power and if we become violent, we will lose this moral power.â€ 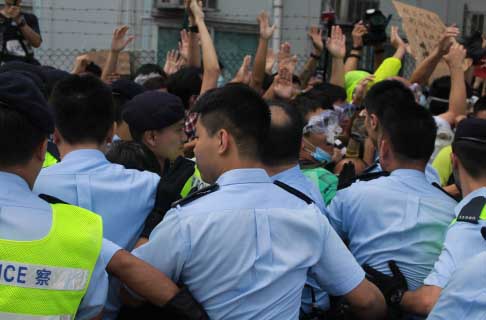 Lai said that although the situation could not be controlled, â€œwe can control ourselves.â€

Lai added that police also deserved sympathy too as they did not mean to harm protesters. 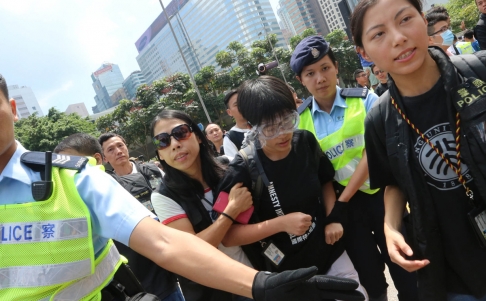 The surprise announcement that the long-threatened pro-democracy sit-in was underway was made at 1.45am by Occupy co-founder Tai, riding on a wave of protest by students who had spent two nights outside government headquarters in Tamar.

â€œIâ€™ve got a long-awaited message. Occupy Central will start now,â€ Tai declared to the thousands gathered in Admiralty, as he urged members of the public to join the sit-in to demand the National Peopleâ€™s Congress retract its decision on Hong Kongâ€™s electoral system made on August 31 and relaunch the political reform process.