Pakistan is indeed growing towards a positive change every day. However, in time we also get to see how there are many occasions where police brutality may become a major hurdle in the growth and productivity of Pakistan. A very upsetting incident took place today where a poor old man who was selling toys on a bicycle was charged with a hefty ‘motorbike challan’.

A video is out on social media where traffic police could be seen giving Rs520 challan to a toyseller. Although the poor man was traveling on foot and on the side of the road, the traffic police claim he was violating a rule.

In accordance with Pakistani traffic laws, going a wrong way is a serious offense. It can lead to probable road accidents. Fair enough! However, if we look at it from another angle, the toy seller was not speeding (of course) or rising his bicycle on a busy road. He was simply walking with his bicycle that had a lot of toys on it.

A poor man on a 'bicycle' issued
'motorcycle' challan' by Clifton police for riding on the wrong way. pic.twitter.com/B296Vfq57s

Traffic police charged the man with a hefty challan

The traffic police seeing this charged the man with a hefty amount of Rs. 520, which is a ‘motorcycle challan’.

Although the man kept on asking for forgiveness and a second chance, the traffic police kept on berating this old man and asked him to pay it right away for his mistake. It isn’t wrong the police charged him with a fine. However, what is truly questionable is how the police are still unsure of how much to charge on the basis of offense.

Or, perhaps, the police officers are unaware of the difference between a bicycle and a motorbike. Either way, this poor old man was a victim of their brutality. Before you think that we are defending offense against justice, we are not. It is to point out that this man is being charged a higher amount than he is supposed to pay. 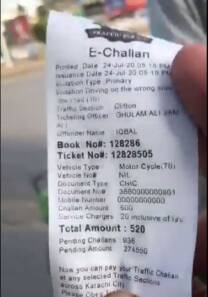 Although the appropriate amount of challan decided by the government is Rs. 500 for those people the motorbike riders. But the poor man doesn’t even have a bike to start with in the first place. So, why should he pay for something that he doesn’t even own?

Confusing and a sad state of affairs isn’t it? Why is it so that we never get to see a man who has a luxury car be arrested for causing major road accidents even? Why is it that only poor people have to be catered to and have to be held accountable under the vice grip of the police.

We hope this poor old man is given a chance and the police also understanding in the future while handing out challans and penalties to civilians about the traffic norms.

Indian Leader Claims Bollywood Celebs Including ‘Shah Rukh Khan’ Have Links With ISI
This Brave Woman, With Toddler Besides Her, Sells Lunchboxes To Help Husband In Running Family
To Top