Another day, another innocent child fell victim to the unethical and immoral activities happening in our social boundaries. Undoubtedly, this year’s Ramadan in coronavirus has frustrated many the increase in child abuse cases; it is alarming.

Every now and then, a brutal case is seen circulating on social media and netizens get busy criticizing the culprits but no solution comes out. Earlier this month, police arrested the man who abused and killed an 8-year-old in Hyderabad during Ramadan. Unfortunately, a similar case of a 15-year-old from Pakistan’s Punjab area is currently surfacing online.

Child abuse case of a 15-year-old from Gujrat

Over the years, such disgusting cases have drastically increased in numbers and it is extremely alarming. According to the viral post, 15-year-old Masi Adil Hussain was sexually abused in a mosque in Punjab, Gujrat. Details reveal that Hussain was observing ‘aitikaf’ in an area mosque when this vicious and disgusting incident took place.

It is indeed a matter of shame for many as such perverts are now targeting children busy with religious practices. Well, as per the viral tweet, the culprit has been identified as Masi Tabraiz Shabbir Hussain. Apparently, the mentioned culprit was also in ‘aitikaf’ in the same mosque living beside the victim, Adil Hussain.

The father becoming the eye-witness

Particularly, earlier this Ramadan, Adil Hussain’s father went to provide dinner to his son as he is in ‘aitikaf’. As soon as he stepped inside the mosque he heard his son screaming from a distance. Running towards Adil Hussain’s living space, his father sees the culprit trying to tear down his son’s shalwar. 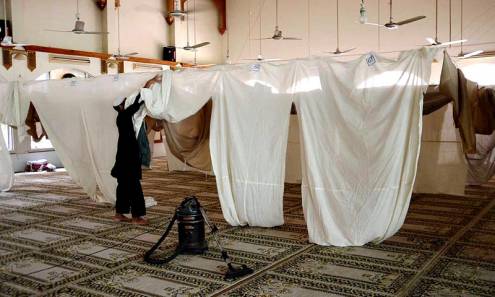 As people started approaching, Tabraiz Hussain immediately ran away from the scene to save himself. However, the latest reports reveal that the local police have arrested the culprit and registered an official complaint. All praises to the police’s active response in the matter but what creates concerns is why have such cases become a part of our society?

Nearly every other day, child abuse stories are seen gathering attention but the authorities still aren’t ready to stop them. Some time back, a 3-year-old child from Punjab became another target of child abuse and it just keeps going on. Well, its high time the concerned authorities start differentiating between right and wrong and put an end to such humiliation.

‘My Wife Abused Me For 10 Years’: Man Shares Horrific Details Of His Married Life
Eid And Eidi, Two Main Factors Hit By Coronavirus This Year!
To Top