Remember the brutal assassination of the doctor who was killed over a trivial issue of water dispute in Mardan? The barbaric murders of Asfandyar Khan Khattak have now been apprehended. The police took a rapid action caught the felons, who murdered the doctor on April 27.

“With the help of Almighty Allah, Mardan Police, through professionalism and hard work succeeded in nabbing the murderers of young DoctorAsfandyarKhattak within almost 72 hours,” said Sajjad Khan.

With the help of Almighty Allah, Mardan Police, through professionalism and hard work succeeded in nabbing the murderers of young Doctor Asfandyar Khattak within almost 72 hours. Taj Nabi khattak, father of the deceased was also seriously injured in the incident. pic.twitter.com/PklwNveu2H

Dr. Asfandiyar was married to a doctor from Lasbeela district and was the father of a son. Besides, Asfandiyar hailed from an educated family. His father, Taj Nabi Khattak who is severely injured is a grade-19 officer. Furthermore, Taj Nabi has remained principal in several government schools of Khyber Pakhtunkhwa. 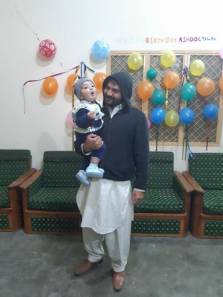 Earlier, the hashtag justice for Dr. Asfandiyar trended on Twitter. His colleges, civil society along with eminent personalities tweeted in his favor and demanded justice.

we demand justice for Shaheed Dr. Asfandiyar and his injured father who is on vent now. #Justice4DrAsfandiyar pic.twitter.com/r5FbD7fpde

The only orphan kid dr Asfandyar left in this cruel world. Who will take the responsiblity to educate and nourish him.His Dad had big dreams for him which he tookaway with himself cux of this cruel and ignorant society.He must ask where is my father.#Justice4DrAsfandiyar pic.twitter.com/5wsGCJuHw5

Dear @ImranKhanPTI
We demand #Justice4DrAsfandiyar who shot dead in his village just over the issue of wasting water with his neighbor .

Dear fellows pls spread this message untill justice is served to this poor family .. Thanks pic.twitter.com/jNOAl2iJBF

Well done and thanks Sajjad sb all the best

May Allah be with you, wonderful job Sir,

Thanks for being professionals, good job done.

People asking to reveal the faces of the culprits