The nation has seen many troubling times, however, never was it so that raising voice for justice was seen as a crime. Given the hard times and sad truths that we see as well as face today. It is devastating to see how so many social issues are still prevailing in our society. Misery hits far worse when it comes to the life of a transgender in Pakistan, who fights for her rights as Julie does who has been dragged into a fabricated case.

When we talk about the trans community in Pakistan, one of the most well-known personalities is Julie Khan. Being a human and trans rights activist she has managed to uncover the dark truths of the society by putting forward the hardships that not only the trans community faces; rather any human being drowning under social issues of Pakistan would be a victim of. 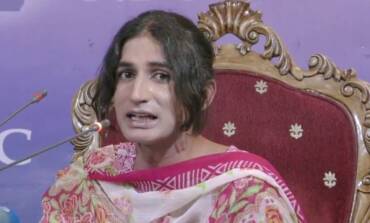 Sadly though, the transgender activist Julie is at the moment under arrest in a case by Islamabad’s police for speaking for her rights! Unbelievable right? Well, here is something far worse, the internet sensation has also been sent to jail over fabricated evidence. The incident took place after another transgender fellow of Julie, Rosy was beaten without any reason.

The abusing party after facing backlash and after Julie and her fellow friends raised voice fabricated evidence against the activist. Rosy’s Guru, puts forward the main highlights of the incident and mentions how the abusers had brutally assaulted Rosy. After raising a voice and appealing to agencies to take action; Julie was arrested on 10th August 2020.

Netizens react to transgender Julie’s unfair arrest in a case

In addition, she was also poorly manhandled by the police. Since then Julie is kept in Adiala jail. Many people are coming forward and condemning the entire situation. Although, this isn’t the first time a transgender has faced brutality or have become a victim of abuse; Julie surely managed to make her voice heard among all the chaos.

Many are coming out to laud Julie Khan for her determination and courage. She is without a doubt a warrior and deserves to be saved.

Most of the social media users must have watched #Julie a transgender activist's series of "naked truth" has got a huge applaud among the ppl has been jailed with a fabricated FIR.@dcislamabad @hamzashafqaat plz look this matter under ur supervision.#JusticeForJulie pic.twitter.com/SfMGRO5hA6

In fact, the trend of #JusticeForJulie is becoming to trend on Twitter as soon as the news broke out. They have labeled Julie as the ‘Voice of the Voiceless’ transgender community.

#Julie is the voice of the voiceless transgender community.She is a brave activist who has highlighted a range of social issues that are swept under the rug.Arresting her in a fabricated case is highly shameful & is tantamount to suppressing her dissenting views#JusticeForJulie pic.twitter.com/YJhHnSvq0U

Some people are also lecturing and schooling all the silent NGO’s for raising their voice. It is indeed questionable; why are they silent when an innocent’s life is in jeopardy? How can people be so insensitive and ruthless towards human lives?

It is indeed still a mystery. And poor transgender Julie is just another example who has been shut down after she spoke for her rights. So many transgenders become a victim to abuse, killings, and harassment without any law or regulation to favor their rights! We hope justice isn’t denied in this matter and Julie’s fabricated crime is waived off real soon!

­­Xiaomi Launches Redmi 9C In Pakistan For People Looking For ‘More’
Peshawar BRT Project Is Finally Up & Running – Let’s Find Out What It Has For People!
To Top