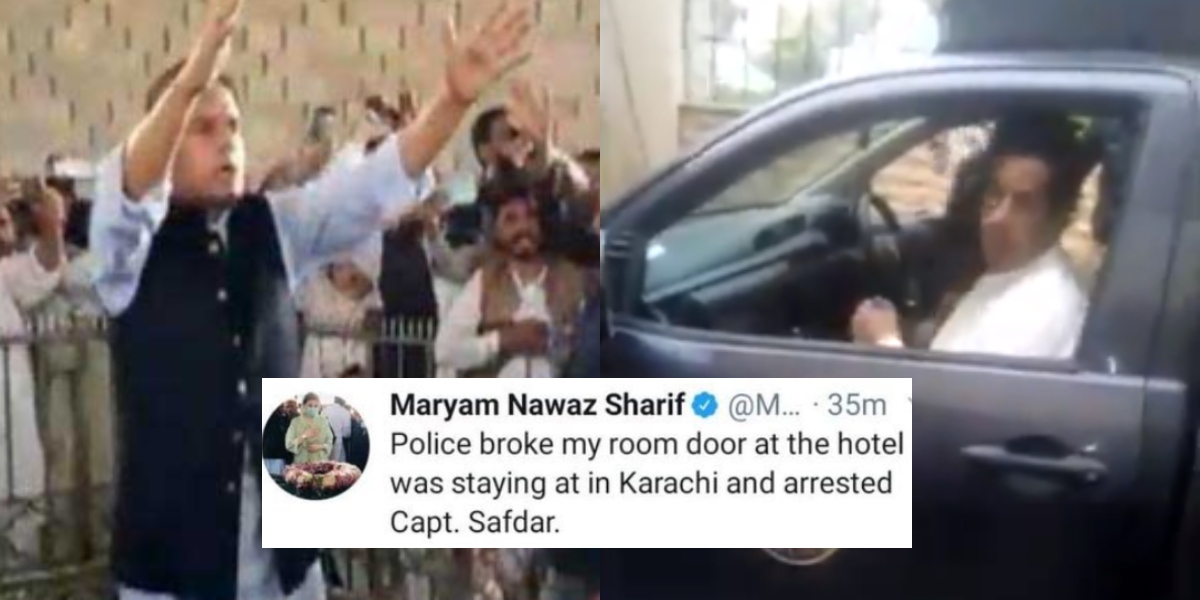 Pakistan Muslim League-Nawaz (PML-N) Vice President Maryam Nawaz along with her husband Captain (R) Muhammad Safdar and other PML-N leaders visited the Mausoleum of Quaid-i-Azam Muhammad Ali Jinnah on Sunday. Due to the shameful behavior at the Mazar-e-Quaid by Capt Safdar, he has been arrested by Sindh police.

They visited Mazar-e-Quaid before attending a public meeting of the Pakistan Democratic Movement (PDM) at the nearby Bagh-e-Jinnah.

At their visit, Safdar started to chant the party slogan “Vote ko izzat do [respect vote].” He also urged people to join him. The supporters and party workers of PML-N responded to Safdar’s call. They chanted along for an extended period of time.

The PTI government condemned the action of Safdar and demanded an apology. Moreover, they also approached the police. They asked them to take legal action against participating individuals.

Later, Sindh Police did register a case against PML-N leaders for chanting party slogans at the Mazar-e-Quaid. The case was registered against Maryam Nawaz, her husband Safdar, and 200 others at the Brigade Police Station in Karachi over the desecration of Mazar-e-Quaid.

The case was registered against the party workers under Section 6, 7 and 8 of Mazar-e-Quaid Protection Ordinance 1971.

PTI workers and the public in general were displeased by the act of Safdar and other PML-N party representatives.

Minister for Planning, Development and Special Initiatives Asad Umar also demanded an apology from the party.

He said, “These shameless people are ignorant of their history. They have no sense of regard and respect for such a place. The party only has respect for Nawaz. They don’t know how to respect anyone else.”

Other citizens of Pakistan were also unhappy at the action of Safdar. They requested strict action to be taken.

In the early hours of Monday, Sindh police arrested Capt Safdar from his hotel in Karachi due to his inappropriate behavior at Mazar-e-Quaid. The arrest was due to the case registered against him for chanting political slogans in Mazar-e-Quaid. Maryam shared the news in a Twitter message.

Ali Zaidi, however, dismissed news that the police broke into the hotel room to arrest Safdar.

In a tweet, Fawad said, “The arrest of Capt (R) Safdar by Sindh Police illustrates the importance of rule of law in the country. Mazar-e-Quaid is not a playground for politicians. It’s a place that is Pakistanis highly respect. Slogan mongering and other non-serious activities at Mazar-e-Quaid are not acceptable. The offenders should be punished for it.”

Even after being arrested, Safdar was chanting party slogans. He is being kept at the Aziz Bhatti police station. It is expected that Safdar will be presented before a court today.

GOALS! This Girl Drives Cab To Fund Her Studies After Father Dropped Her Out Of School
Is ’50 Crore’ A Pakistani Version Of Money Heist? Well, Here Are The Details
To Top