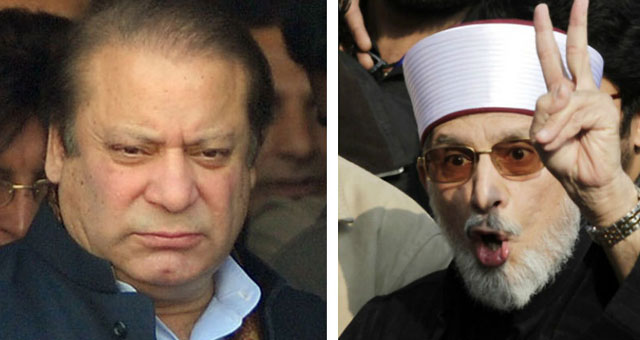 LAHORE: Although an influential lobby in the ruling PML-N is favouring use of strong-arm tactics against Dr Tahirul Qadri, Prime Minister Nawaz Sharif has explored the option of engaging the Pakistan Awami Tehreek chief through the Punjab governor.

Mr Sharif discussed the possibility with Chaudhry Muhammad Sarwar at the airport before his departure to Islamabad here on Tuesday. He was in the Punjab capital since Sunday to directly monitor the situation after the landing of Dr Qadri on Monday.

The governor apprised the prime minister of the demands Dr Qadri had made during negotiations with him in the â€˜plane meetingâ€™.

A senior official said that Mr Sharif had agreed to release PAT activists who had been arrested under Section 16 of the Maintenance of Public Order as a â€˜confidence-building measureâ€™.

The activists would be released from courts as the government would not oppose their bail pleas, he added.

The release of PAT activists from various police lock-ups has begun.

Police have been directed to make security arrangements for the Minhajul Quran headquarters in consultation with and to the satisfaction of its administration.

Governor Sarwar visited Dr Qadri in the evening to apprise him of the steps the government was taking in response to his demands.

According to a PML-N leader, Ittefaq mosque khateeb Riaz Husain Shah had also been kept standby for further improving relationship with Dr Qadri.

But the PAT leader, he said, was not showing flexibility on his stance about the Sharifs and was consistent seeking resignation of the chief minister calling him the mastermind of the June 17 tragedy.

â€œShahbaz Sharif is the real killer of my workers and I cannot forgive him,â€ he quoted the PAT chief as telling the governor.

Also Read: Shujaat offers to mediate between PML-N and Qadri

He said Dr Qadri told Mr Sarwar that he had come to the country to build a political movement and would not give up his plan, but the rulers must not fear that he was up to derail the democratic system.

Answering a question about the defensive stance of the government, he said prominent lawyer Ahmed Raza Kasuriâ€™s revelation that he was working as a bridge between Dr Qadri and former army chief Pervez Musharraf to forge a grand opposition alliance against the PML-N government had made the Sharifs cautious in handling the Minhajul Quran and its chief.