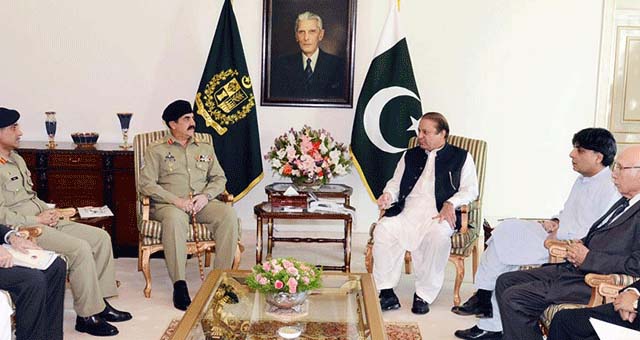 ISLAMABAD: The military and national security aides presented on Tuesday options to Prime Minister Nawaz Sharif for responding to Taliban terror attacks across the country.

Mr Sharifâ€™s meeting with his national security team came against the backdrop of possibly the worst wave of terrorist attacks in the country this year.

Taliban militants in the country have attacked the Karachi airport, personnel of a sensitive institution in Fatehjang and troops in tribal areas and those having sanctuaries in Afghanistan have carried out deadly strikes on border posts in Bajaur. Sectarian militants affiliated with Taliban have, meanwhile, targeted pilgrims in Taftan.

A brief statement issued by the Prime Ministerâ€™s Office said: â€œMatters relating to internal and regional security, including Fata, Karachi and Balochistan were discussed.â€

The meeting also reviewed reports by law-enforcement agencies on the recent incidents based on preliminary findings.

Prime Minister Sharif has so far been sticking to the dialogue option for finding a solution to the Taliban militancy.

However, a source claimed that the military had ramped up pressure for a sterner response to the attacks by Taliban. The militaryâ€™s case has been built on the premise that the Tehreek-i-Taliban Pakistan has again started owning up the strikes; and Fatehjang and Karachi attacks, in particular, mark the crossing of the redline.

Officials were not ready to say if the government agreed to the military demand for more punitive strikes.

â€œThe prime minister is looking at a range of options and a final decision may be taken at a meeting of the National Security Committee likely to be held later this week or next week,â€ an official said.

It is said that before taking a decision the prime minister will also like to see progress on Khyber Pakhtunkhwa Governor Sardar Mehtab Khanâ€™s attempt to use tribal jirga for evicting militants from North Waziristan.

The discussions at the national security meeting will be internally shared by the military at its Formation Commanders meeting on Wednesday.