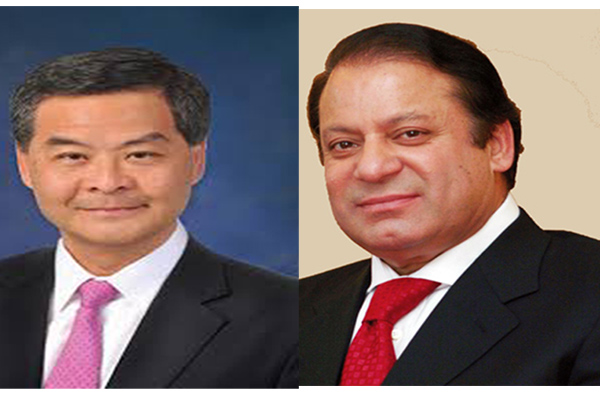 Prime Minister Muhammad Nawaz Sharif on Wednesday met the Chief Executive of Hong Kong, Leung Chun-Ying to discuss the bilateral ties and ways of enhancing the cooperation in multiple spheres. The Prime Minister landed in Hong Kong on Tuesday for a three-day visit.

He was accompanied by Minister for Commerce Engineer Khurram Dastgir Khan, Ambassador of Pakistan to China Masood Khalid, Chairman Board of Investment Miftah Ismail and others. The chief executive was accompanied by Finance Secretary Hong Kong Paul CHAN Mo Po, Commissioner for Belt and Road Yvonne CHOI Ying Pik and Secretary Treasury.

He stressed that the cooperation between the two countries in different sectors must be enhanced. Prime Minister Sharif said that several companies of Hong Kong had their permanent offices in Pakistan which testified their trust in the country. He said that China-Pakistan Economic Corridor would enable traders to transport their goods to the world through Gwadar Port.

The Prime Minister said that the Pakistan’s liberal trade policies have provided ample opportunities to the investors of Hong Kong. He also encouraged the businessmen from Hong Kong to take an active part in CPEC which is for the mutual benefit of the two nations.