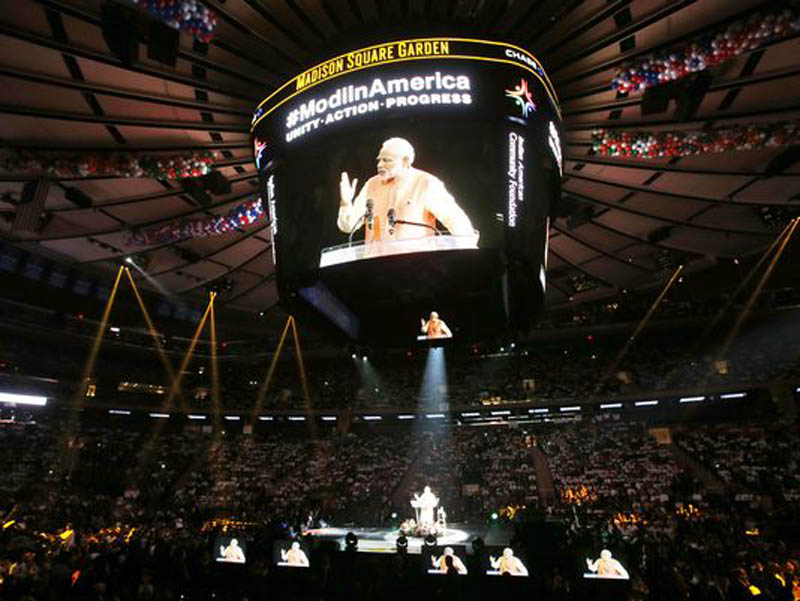 Speaking from a rotating stage, Prime Minister Narendra Modi told the crowd of about 20,000 people, “In India democracy is not just a system, it’s a faith. It’s a belief!”

Modi’s appearance here comes before he heads to the White House for meetings with President Obama on Monday and Tuesday. Modi addressed the United Nations General Assembly on Saturday.

Modi, speaking in Hindi, used the rally that included members of Congress and other dignitaries to list what the world’s most populous democracy offers to the world and to point out common ground with the United States, the world’s first democracy.

India’s second-largest population in the world is “a demographic dividend,” and the country’s large number of educated professionals means “we will provide a workforce to the entire world,” Modi said. “You cannot go anyplace in the world and not see an Indian.”

The audience â€” young and old, including women in saris and western dress â€” cheered, laughed and chanted “Modi Modi” with their fists raised in agreement.

Nudan Joshi, a doctor from Pune, India, is visiting her daughter in New York City and watched the speech on a huge screen in Times Square. She said Modi’s election in May has electrified India because he promotes Hindu culture while seeking economic development.

“He loves India. He want to present the philosophy of India â€” live and let others live, peace and tranquility â€” he wants to convey that message globally,” said Joshi, who wore a colorful red and orange sari. “At the same time, he wants to increase the business environment.”

Ahmed Syed, a Muslim IT consultant from San Diego, carried a poster with a photo of Modi on one side, and photos on the other of Hindu militias training with firearms in India, with the message: “Wanted: Narendra Modi for crimes against humanity.”

In 2002, when Modi was governor of India’s Gujarat province, Hindu rioters killed 2,000 Muslims. Modi, a Hindu nationalist, is accused of helping incite the crowds, and police under his charge were accused of joining the rioters and shooting Muslim civilians.

The State Department barred Modi from traveling to the United States until he became India’s prime minister.

“Just because he’s in power we’re not going to forget what happened to those people,” Syed said. “We want justice.

“Once a fascist always a fascist,” said Satish Kolluri, a Pace University professor who helped lobby members of Congress to block Modi from getting a visa in the past.

The Hindu cultural nationalism that Modi promotes “goes against the grain of secular India,” Kolluri said. “India is like America, we celebrate secularism.”

Inside the hall, Modi declared that he had never seen a crowd give so much love to another Indian speaker and called the warm reception a loan.

“I will repay the loan. I will create an India of your dreams. Long live Mother India!” Modi said.

Komal Thakkar, 20, a student at State University of New York-Albany, was pumped after the speech and said she will take up Modi’s invitation to the crowd to go back to India, at least for a visit.

“He started the speech talking about youth, how he wants to support them and make things better for us,” she said. “He makes us very proud of India.”

Among the many pledges Modi made was to improve India’s economic development and its environment, a mass movement involving every Indian, said Judy Gupta, a part-time stockbroker from Long Island who wore a sash and large badge of green, orange and white â€” the colors of India’s flag.

“He understands the problems the common man faces, because he’s seen it himself,” Gupta said.

Kamlesh Patel, a software engineer from Long Island who, like many in the crowd, wore a T-shirt emblazoned with Modi’s image, said the prime minister’s humble beginnings â€” he started as a tea vendor at train stations â€” help him connect to the masses.

“We never had such a prime minister who could move the people of India,” Patel said. “He’s going to change India for the better.”

Obama: U.S. underestimated Islamic State Syria and Iraq
How to buy an unlocked iPhone 6
To Top