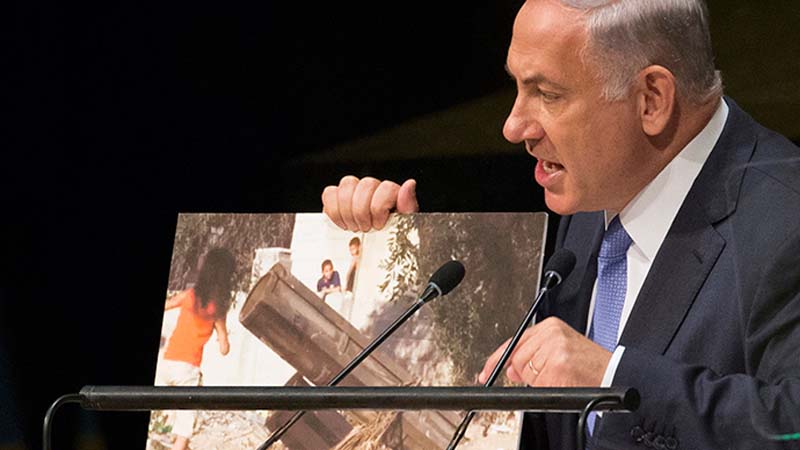 â€œMake no mistake â€“ ISIS (Islamic State) must be defeated. But to defeat ISIS and leave Iran as a threshold nuclear power is to win the battle and lose the war,” Netanyahu said at the UN headquarters in New York.

“Iran’s nuclear military capabilities must be fully dismantled,” he added.

As for Tehran’s recent â€œcharm offensiveâ€ for the West, its true purpose is to see the international sanctions lifted “and remove the obstacles to Iran’s path to the [nuclear] bomb,” the prime minister stressed.

He also slammed the countries, which now fully back US-led airstrikes against ISIS, but used to criticize Israel for their war against Hamas in Palestine.

The PM stressed that Islamic radicals from ISIS and Hamas share the same task â€œof imposing militant Islam on the world.â€

â€œHamasâ€™s immediate goal is to destroy Israel, but it has a broader objective. When it comes to its ultimate goals, Hamas is ISIS, and ISIS is Hamas,â€ he said.

According to Netanyahu, the 50-day operation in Gaza this summer, which saw 2,100 Palestinians â€“ mainly civilians â€“ killed and some 18,000 homes destroyed, was Israelâ€™s war against â€œglobal militant Islam.â€

The head of the Israeli government put the blame for civilian casualties on Hamas, which, he said, committed â€œthe real war crimesâ€ by using ordinary civilians as human shields.

He refuted claims by Palestinian leader Mahmoud Abbas, who accused Israel of conducting a â€œwar of genocideâ€ in Gaza in his UN address at the weekend.

Netanyahu believes that Israel canâ€™t be accused of genocide as it gave advance warnings to Palestinians before shelling neighborhoods in the densely populated Gaza area.

The PM also blasted the UN Human Right Council, which sends â€œa clear message to terrorists to use civilians as human shieldsâ€ by condemning Israelâ€™s actions in Gaza.

The Human Right Council â€œturns the war upside downâ€ and is deserved to be called the â€œTerrorist Rights Council,â€ he stressed.

The Prime Minister also said that such common challenges like nuclear Iran and militant Islam provide a historic opportunity for Israelâ€™s relations with the leading nations in the Arab world.

According to Netanyahu, Palestine can be reached though good relations with Arab world, but not the other way around as many thought before.