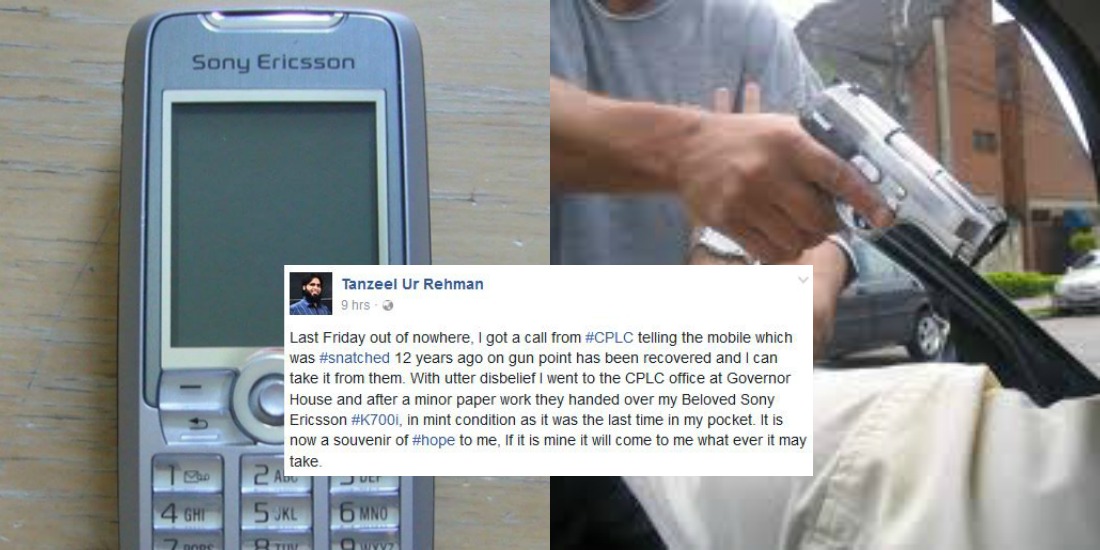 Have you ever been a victim of such a street crime where you were robbed or your belongings were stolen from you? If yes, then what did you do to bring your stolen item back to you? Street crimes are common in any part of the world. In Pakistan, when one thinks about street crimes Karachi is the place where mind goes. Media has stressed on Karachi’s crime events so much that it has become a stereotype. However, that is another story and we are not here to discuss that! We shall look towards this strange story where a guy lost his phone on gunpoint but, received it from government 12 years later.

Tanzeel Ur Rehman has shared quite a strange story about how he lost his Sony Ericsson phone. But later the government helped him get it back 12 years later. Here is what he has to say:

“Last Friday out of nowhere, I got a call from #CPLC telling the mobile which was #snatched 12 years ago on gun point has been recovered and I can take it from them. With utter disbelief I went to the CPLC office at Governor House and after a minor paper work they handed over my Beloved Sony Ericsson #K700i, in mint condition as it was the last time in my pocket. It is now a souvenir of #hope to me, If it is mine it will come to me what ever it may take.”

Upon receiving the phone Tanzeel Ur Rehman realized that the battery was dead and needed to be replaced. For a phone that was so famous 12 years ago, it was hard to find it battery pack from the market, as Tanzeel tells us. However, with much determination the battery was found and the mobile phone was brought to life.

Tanzeel claims that if something is truly his, it (or they) will find its way to him no matter what happens or whatever it takes. These are surely motivating words and his story about his retrieved Sony Ericsson phone is one great example.

These Hilarious Reactions by Pakistanis over the Internet Failure Are Simply Priceless
The Trailer of this Upcoming Pakistani Horror Film Will Scare you to Death!
To Top