A Ph.D. Student Of Karachi University Takes Her Life After Being Allegedly Harassed By Supervisor

The issue of harassment has been prevailing in the society of Pakistan for a long time. May it be street-calling or workplace harassment, the stigma is prevalent and no such action is taken on the matter regardless of how it can distortion someone’s mental state of mind. Hence, this incident of how a KU Ph.D. student was allegedly harassed to a point that she takes away her own life will truly shock you!

Nadia Ashraf – a brilliant and bright Karachi University Ph.D. student – takes her own life after feeling pressured and being allegedly harassed by her supervisor.

This young bright student was a student of Dr. Panjuani Center for Molecular Medicine and Research, Karachi University. The poor doctoral student was unable to complete her research due to family pressures and psychological stresses. To make matters worse, her supervisor kept on giving her a hard time. 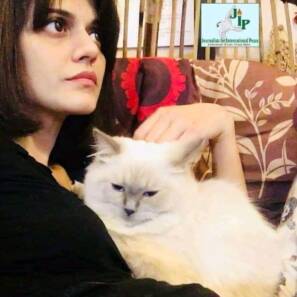 At the moment, a full-length inquiry regarding this disturbing incident is being carried out. Reports are suggesting that such an issue must not rise again. Perhaps the entire research supervision framework must be brought under consideration so that no one can make the same mistakes again.

Twitterati mourns for the life lost of KU student

The minute the news broke on social media about this KU student who takes away her own life because she was harassed, netizens, and Twitterati have been feeling sorrowful and sharing their condolences. As a matter of fact, they are demanding justice for Ashraf’s life. They are even questioning Pakistan’s official authorities and the people regarding these disturbing issues that growing day by day!

What's happening in Pakistan. Child rape , women harassment cases, transgender harassment, our Nation is seriously under so much criticism. We as a nation should stop such nonsense acts. We should have to be united in every sense. #JusticeForNadiaAshraf #JusticeForJulie

Last year, there were complaints from hundreds of medical students that they were being harassed from their professors. Professors were asking for sexual pleasure activities, bribe among other ill-offers and threatend to fail student for not giving consent.#JusticeForNadiaAshraf

In addition to that, some are even asking the respective authorities to take strict action against the supervisor for allegedly harassing the student.

This is the Culprit of Nadia Ashraf. Is he arrested for investigation???@murtazawahab1@ameerabbas84@siasatpk@PakPMO#JusticeForNadiaAshraf pic.twitter.com/olOYHo2J7y

The supervisor was continuously harassing and abusing her for her work, credibility, and research. It is highly unethical to do so. According to the supervisory criteria of research; supervisors are supposed to guide and assist research, not gain ownership of it or the student in any manner. So why did he do it?

We live in a brutal world where children are being abused and murdered. A world where woman cannot go out without being harassed. A world where a girl is not allowed to achieve her dreams because of a sick minded perpetrator.
We are sorry, Nadia…#JusticeForNadiaAshraf

Simultaneously, many are demanding strict actions to be taken regarding irrelevant questioning during interviews and unnecessarily intimidating young students, just for the sake of some kind of pleasure?

We wonder what satisfaction can one possibly get by ruining the minds and confidence of someone.

We belong to society where harassment is consider normal and accurate behavior. A PhD student commit suicide because of her professor. Who is resposible for this ? #JusticeForNadiaAshraf pic.twitter.com/lWnSVm5iua

Finally she collapsed to brutality of university and supervisior #JusticeForNadiaAshraf pic.twitter.com/MzHzoFjjJy

Will harassment ever end?

It is truly devastating and sad to see how young talent is hampered and lost just due to these overlooked social evils that have caught the Pakistani society in its vile grasp!

The issue with harassment isn’t new. In a nutshell, this has been going on for a while now. For instance, take the incident of how young LGS students have been harassed by their teachers.

Regardless, the practice of harassment prevails without any action take or regulatory bodies intervention. Will mental health ever be given the importance it deserves.

We hope that the right action is taken at the right time. Provided the situation, our country is facing right now. The most heartbreaking thing for any economy could be losing its young talent. However, suicide is not a way out. We pray for the young and vibrant soul. May her soul rest in peace.

The Grass Is Greener Somewhere Else
CPEC Authority Launches Paid Internship Program For Talented Pakistani Youth. Here’s How You Can Join!
To Top