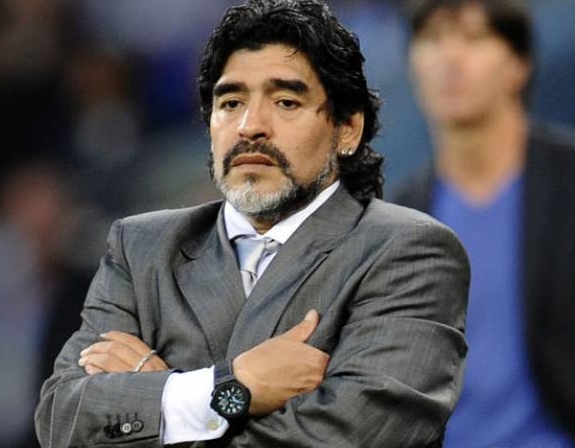 ISLAMABAD – Pakistan’s football chiefs Thursday invited Diego Maradona to visit the country after the Argentina legend disparagingly compared his own association to the South Asian nation’s. The 53-year-old accused the Argentine Football Association (AFA) of “understanding as much about football as Pakistan does”.

The 53-year-old won the 1986 World Cup with Argentina and coached the South Americans at South Africa 2010, where they crashed out with a 4-0 defeat to Germany in the quarter-finals. A footballing icon, Maradona won league titles in Spain, Italy and Argentina, but has never transferred his playing success to coaching. In the wake of the failed World Cup bid four years ago, Maradona publically fell out with AFA president Julio Grondona and the national team’s director Carlos Bilardo, accusing the pair of sacking him.

Four years on, Maradona has not forgiven the AFA and hit out at his former employers, comparing them to the Pakistan Football Federation, who are ranked 158th in the world. “The AFA has played dirty tricks on me. I should have also been the Argentina coach at the World Cup (at Brazil 2014). But the current leaders of the association understand as much about football as Pakistan does,” Maradona told Sport Bild.

“They don’t have a clue at all. To clarify: There are certainly many good things in Pakistan, but I have never seen them play a World Cup final. I say: The current association leaders in Argentina are the same as Pakistan.”

Naveed Haider, a senior official of the Pakistan Football Federation, welcomed the fact Maradona was talking about his country and urged him to visit to lift the game’s profile. “I would love Maradona to come to Pakistan and help Pakistan,” Haider told AFP, noting that the Argentine was already a sports ambassador for Dubai. “He plays a very effective role and we welcome him to come and develop football here.”

He acknowledged that Pakistan, ranked a lowly 158th in the world, had a long way to go but said they had made great strides in recent times. “We want to do more than we are doing but we have achieved a lot in the last few years,” Haider said, citing Pakistan winning the Asian Football Confederation’s “Aspiring” nation award last year.

He also noted Pakistan had climbed in the rankings from a low of 172 last year to their current position, and had recently drawn a match with higher-ranked Malaysia. Tariq Lutfi, head coach of the Pakistani champions Khan Research Laboratories (KRL) said Maradona’s comments were out-of-date. “He would be right if he was talking 12 years back. But nowadays the federation is taking many steps including doing a lot for its youth programme,” he said.

Last month, KRL strikers Mohammad Adil and Kaleemullah signed for Kyrgyzstan champions FC Dordoi — a further sign of improving standards in Pakistan, according to Lutfi. Maradona is widely regarded as one of football’s greatest ever players and helped his team win the 1986 World Cup, but has never transferred his playing success to coaching, leading the South Americans to an ignominious 4-0 quarter-final exit to Germany at South Africa 2010.