Things Are Getting Intense Between Auj & Aarish In Pepsi Battle Of The Bands And Who Will You Vote For?

Finally, after a momentous journey of 2 months, the Pepsi Battle of the Bands season 4 is coming to a swift, but a thrilling end. Indeed, we have seen one of the best seasons of the competition yet, where we finally have our two finalists, battling it out for the most esteemed musical prize in Pakistan.

Both Auj and Aarish have beaten all odds with their quality and never-say-never spirit, making it to the grand finale of the competition. The final verdict, however, lies in the hands of you, the fans, the audience, the people who make this competition what it is! 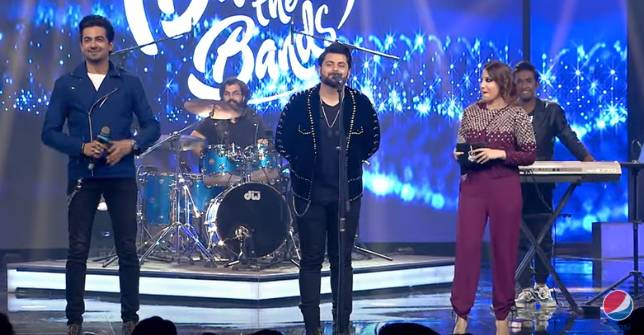 The final episode, the one that everybody had been waiting for, comprised of two rounds of belting music. First, the bands had to perform one of their original songs, and in the second round, they’d take up a cover they could do absolute justice to.

It was Aarish who opened round one with their original song ‘Umeed’, hoping it would be enough for the audience to support them in winning the competition. The jury loved the song and urged fans to vote for Aarish if they enjoyed it as well.

Then came the moment of truth, when Abdul Rehman and the men of Auj came to the stage with their original song ‘Raat’. We at Parhlo were left mesmerized by the maturity, sound, and lyrical composition of the song, submerged with the epic vocals of the lead singer Abdul Rehman, who is a VOCAL POWERHOUSE.

‘Raat’ by Auj has to be one of the best Pakistani songs in the last decade, and if you haven’t voted yet, we’d urge you to vote for Auj just on the basis of THIS song (yes, we can use our influence like Bilal as well). BEAUTIFUL! Meesha Shafi went all out to give Auj their first standing ovation from her, even asking them to send her the song as soon as possible. The rest of the judges were as flabbergasted as their female counterpart.

After the first round was over, the audience and judges welcomed back runners-up of Pepsi Battle of the Bands season 3, Xarb, who were there to perform their original song ‘Siyaah’ which shook the floor and set the mood for round 2.

In the second round, the show upped the ante when both bands had to perform a cover of the most legendary music icon in Pakistan’s history, Ustad Nusrat Fateh Ali Khan Sahab. First up Aarish chose ‘Halka Halka Suroor’, with the special edition of DJ Faisal Baig, who helped give the song an EDM touch which the jury loved.

Next up, Auj performed Khan Sahab’s ‘Saanware’ and literally blew everyone’s mind with the outro mashup infused by DJ Faisal Baig. Abdul Rehman’s vocals were once again the center of attention, with Bilal Maqsood urging and influencing fans to vote for Auj and make them win this competition.

Check out the full episode of Pepsi Battle of the Bands season 4 finale here!

In the end, both bands paid homage to the jury, the judges, who had brought them here in the first place with their honest and diligent feedback throughout season 4. 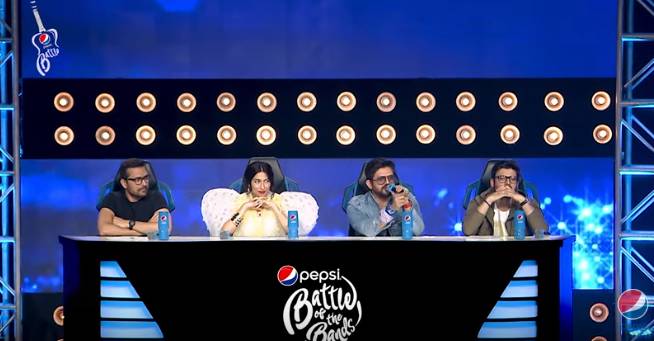 While the final decision will be announced two weeks from tonight, now it’s up to the audience to vote for their favorite band. The winner of Pepsi Battle of the Bands season 4 will receive Rs 50 lac cash prize, an album contract, concerts all over Pakistan and lifetime royalties of original tracks performed during the show. And even the runner-up will win Rs25 lac and an album contract.

Here’s how you can vote for your favorite band!

Or log on to www.pepsibattleofthebands.com and vote. Another way is to download the Pepsi Battle of the Bands app on the phone and vote for your favorite band.

Maleeha Lodhi’s Son Marrying An Indian Hindu Girl Is Now Raising Many Questions Regarding Pakistan’s Security!
Beware Karachites! 7 Crocodiles Escaped From A Farm, Authorities Have Only Captured 5.
To Top