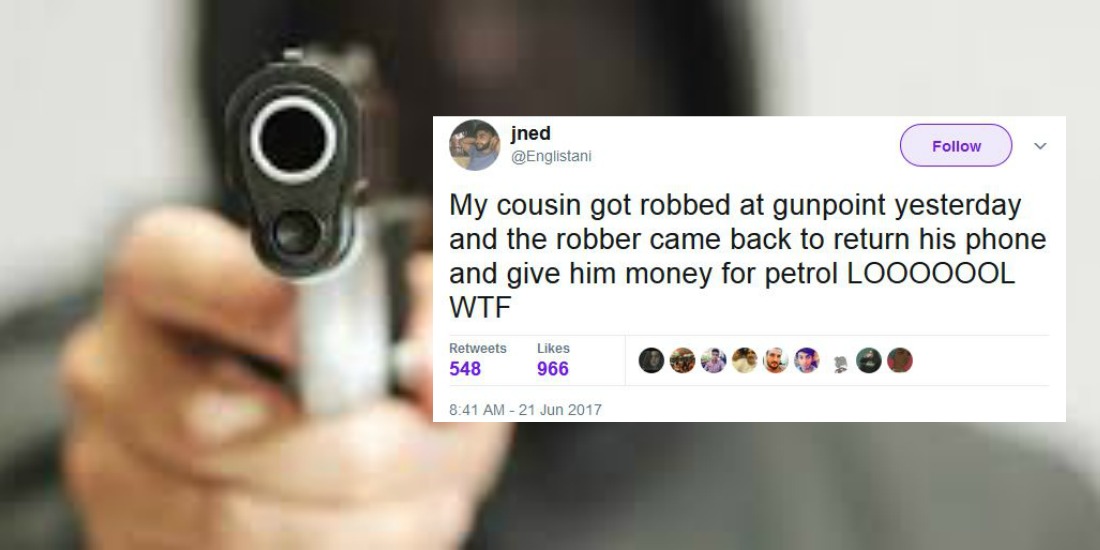 Ever heard a story about some person getting mugged in a shop or some busy place? We all have heard about those types of stories, especially those where the thief takes out a pistol and robs someone at gunpoint. Such a crime is so common in Pakistan that people do not even report it. CCTV footages are provided to the police but the criminals rarely get caught and the stolen items are rarely brought back. However, have you ever heard the stories where the thief actually brought back the items just because they did not feel like robbing? Well, we just came across a whole bunch of these stories and here they are:

The Guy’s Cousin Got Robbed, A Few Minutes Later…

This All Happened Because…

And Later we find out that the robbers only took Rs. 400 from the cousin’s wallet.

Everyone Knows An Angry Wife Is Worse Than A Nuclear Fallout, Even The Robbers

My chacha got mugged once. he told the mugger to give him back just 1100 or chachi would be mad he didn't pay the doodhwala,& the robber did

my friend got mugged in Karachi, he asked robber to give his sim back and he did and said ab hum se to koi shikayat nahi hena ?

I got mugged, I requested him to give my sim, he gave me the sim and also the memory card

Robbers in Pakistan stole my cousins car and money, but gave him a ride home. Man's aren't that heartless

a robber once took my cousin's phone but came back few mins later, threw the phone on his face and told him to get a better phone

Another one: cuz got mugged by dude on a bike, told the robber to drop him at the next chowk so he could catch his van home and he did……

What Goes Around, Comes Around – Karma

My friend got robbed & after realizing what he had lost, he rushed towards the next point and robbed the same robbers to get his stuff back

If something similar happened to you or someone you knew, let us know in the comments below!

Sahir Lodhi Lands Into Trouble Once Again As PEMRA Issues Another Notice!
Parhlo Exclusive: The Person Behind “Kohli Nahi Hota Tujhse Chase” and Its Full Story
To Top