The Pentagon recently released three declassified videos that show US Navy pilots encountering what appears to be unidentified flying objects (UFOs). According to the Pentagon, these videos depict unexplained aerial phenomena that were previously leaked.

A statement on the Department of Defense website said: “We released the footage to clear up any misconceptions by the public on whether or not the footage that has been circulating was real or whether there is more to the videos.”

“After a thorough review, the department has determined that the authorized release of these unclassified videos does not reveal any sensitive capabilities or systems, and does not impinge on any subsequent investigations of military air space incursions by unidentified aerial phenomena,” said the statement.

The Department further added: “The videos have been circulating in the public domain after unauthorized releases in 2007 and 2017. The aerial phenomena observed in the videos remain characterized as unidentified.”

The three videos illustrate what the pilots saw during training flights in 2004 and 2015. The New York Times published two of the videos in 2017. The Stars Academy of Arts and Science group, a media and private science organization released the other video. In April 2019, the US Navy acknowledged release of these videos prompted development of new guidelines for how pilots should report UFO sightings. 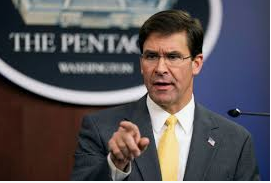 The video released by the Pentagon does add to the legitimacy of the videos. This will also spur more speculation that Americans interacted with aliens.

Former US officials provide their views of the videos

In response, the former Senate Democratic leader Harry Reid provided his views. He tweeted that the three videos only scratched the surface of research and materials available.

Harry said: “I’m glad the Pentagon is finally releasing this footage. However, it only scratches the surface of research and materials available. The U.S. needs to take a serious, scientific look at this and any potential national security implications. The American people deserve to be informed.”

I’m glad the Pentagon is finally releasing this footage, but it only scratches the surface of research and materials available. The U.S. needs to take a serious, scientific look at this and any potential national security implications. The American people deserve to be informed. https://t.co/1XNduvmP0u

Retired Commander David Fravor earlier told ABC News in 2017 of what he saw during a routine training mission on Nov. 14, 2004, off the coast of California.

Fravor said: “I’m not crazy, haven’t been drinking. It was after 18 years of flying, I’ve seen pretty much about everything that I can see in that realm. This was nothing close. I have never seen anything in my life, in my history of flying that has the performance, the acceleration keeps in mind this thing had no wings.”

What do you think of this video? Let us know in the comments section below.

Hasnain & Sabeeka Are Having Ex-Lover’s Spat While Twitteratis Are Here For It
Feeling Hot This Ramadan? Try This Fresh Lebanese Mint Lemonade Drink
To Top