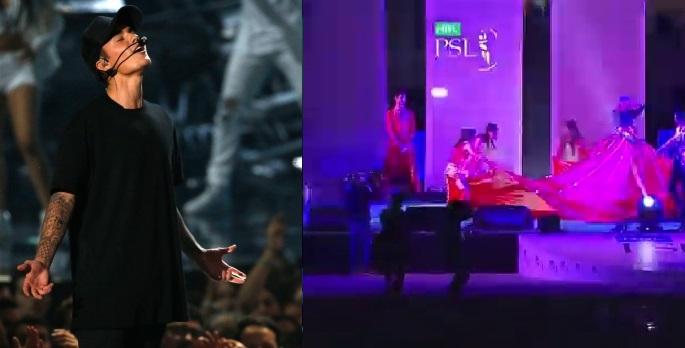 Who doesn’t remember the marvelous success of the inaugural season of Pakistan Super League… The League broke dozens of records in terms of rating and viewership in Pakistan and around the world. It is all owed to the amazing combo of entertainment mixed with cricket and again, like the renowned international performers seen in the opening ceremony of the first PSL, the second PSL will also include global superstars as PCB has invited Justin Bieber for the ceremony.

Yes, the international music sensation and heartthrob of millions of young girls around the world, Justin Bieber has been approached by the PCB to perform in the opening ceremony of the Pakistan Super League’s upcoming edition. Along with the Canadian sensation, Pakistani superstar Ali Zafar who rocked the screens in the first season of PSL will again be among the list of entertainers. Now that’s supposed to be a cool show!

Dunya News reported that the Canadian-born singer has demanded Rs 5 Crore to perform in the event for which PCB has agreed to.

This strengthens the trend that had been set in the inaugural season to invite international stars to perform in PSL opening ceremonies. In 2016 edition of PSL, Jamaican rapper Sean Paul was invited to the opening event who rocked the stage and send chills to viewers around the globe.

The event scheduled in Dubai was a huge success last year owing to tremendous organizing and marketing of the event. With the inclusion of many international cricketing stars in the tournament combined with Pakistan’s interest in cricket, the event involving teams from Pakistani provincial capitals broke all records of ratings around the country. The edition was also watched by millions of cricketing fans in other countries of the world. People even suggested that PSL has become the second most popular cricketing league in the world.

The move to include international stars, especially Justin Bieber, in PSL opening ceremony is going to be a masterstroke owing to the fact that PCB intends to reach out to viewers around the globe for this season of its super-duper league. Furthermore, for good or for fun, Justin Bieber makes news wherever he goes. And this is confirmed by the interest being shown by Pakistani Tweeps showing mostly positive emotions on Twitter.

So Justin Bieber is gonna perform in PSL opening ceremony? *-*

With such reports, one could be sure that like the inaugural season, the upcoming season of PSL will also be a huge success and we would once more see a really cool opening ceremony on 9th February 2017. Mark your calendars now and don’t blame us that we didn’t tell you…

The 7Up Foodies Festival Is Coming To 14 Cities Of Pakistan And There’s All The Food You Can Dream Of!
Ahmadi Mosque Set Ablaze As Pakistan Celebrates Eid Milad-un-Nabi!
To Top