How To Pay Your E-Challan In Pakistan|Parhlo.com

Punjab Safe Cities Authorities (PSCA) has come up with an E- Challan system that is an Electronic Traffic Violation Ticket system. This particular method has been introduced in Lahore for about a year now.

Every Pakistani understands that the traffic police of the country is corrupt and unjust. Many of the traffic police officers stop cars or motorbikes just for the sake of earning money; even though it is illegal and morally wrong. Often, a person that didn’t even break the traffic laws is pulled to the side and fined a ticket.

The citizens generally try to avoid receiving a fine because they know that paying it would require them to go the government offices. And that is a long and tiring process. Not to mention, there is a considerable amount of mismanagement within such organizations as well. So, even paying a simple parking or speeding ticket becomes a nightmare.

This is something that the traffic police officers understand as well. They, then, try to bribe extra money out of the person that they stop, in hopes they could earn their own ‘pocket money’. It is a sad and harsh reality surrounding Pakistan because both the officers and the citizens are trying to earn a livelihood. However, what is illegal is illegal and there should be zero excuses or justifications to back something frown by the law.

What Is The E-Challan System?

Regardless, this new electronic system is completely changing the game for Pakistan. It has been first released in Lahore and is now spreading around the country. The system has finally reached the capital, Islamabad, as well. The working process of this system is easy, it basically involves cameras. Cameras are attached in multiple locations all over the city. Then, through the help of the identification process of the Automatic Vehicle Number Plate Recognition (ANRP) cameras, an E-Challan is dispatched to the perpetrator’s house. 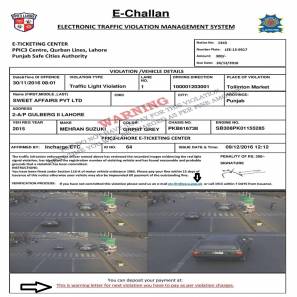 It is a quick and effective process that leaves zero room for fraud. Though, there have been cases where the challans reach the wrong residential address. This happens when the owners have changed their address from the one registered in their vehicle ID’s to a completely new address. In other cases, some people have not been able to receive their challans because of issues from the organization’s side. These are specific cases and don’t account for the huge population of the cities.

Nevertheless, this gesture by PSCA is openly praised all over the nation because Pakistan is one of the countries where traffic rules are daily broken. This is why it is necessary to enforce rules where people have to restrict themselves from breaking the law and engaging in illegal activities. A country comprising of people that don’t even diligently follow the law will never be able to prosper. This is something that we can witness within history as well. 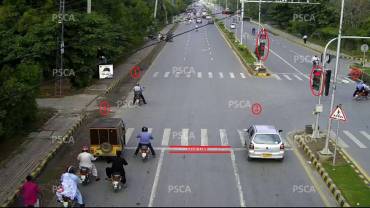 Most of the successful countries that have the title of ‘First World’ attached in front are at a pedestal because of their obedient citizens. Loving and appreciating your country is one thing, but demonstrating those feelings through actions is the most important.

Authorities send in the E-Challans in two ways: sending a physical copy to the home address or updating through their online website.

If you want to know whether you have been issued an E-Challan or wish to see your traffic violation status, you need to follow these simple steps:

One thing you should keep in mind is that the CNIC needs to be of the owner of the car. If the car is not registered under your name, then do not put in your CNIC number.

How to pay your E-Challan:

Paying the E-Challan isn’t that difficult as well. There are two methods that you can use to pay your challan. The first method is paying manually. You have to download the E-Challan document from the website and submit it to the National Bank of Punjab (NBP) along with the money. You can also use the bank’s ATM’s to pay the challan.

The second method involves paying the E-Challan online. The app for the payment of E-Challans online still hasn’t been properly developed. So the best option is to simply take the physical copy of the E-Challan and conduct the payment manually. If you dislike standing in long lines then you can always opt for ATM’s.

What do you think of the situation? Have you ever had to pay an E-challan before? Is this new system going to work out in Pakistan for long? Share your thoughts using the links below.

Meet Umair Khan – An Upcoming Artist Who Is Finally Giving Pakistan Its Own Cultured Superheroes!
Tecno Appoints Airlink As New Distributor To Enhance Availability Of Its Smartphones Across The Country!
To Top