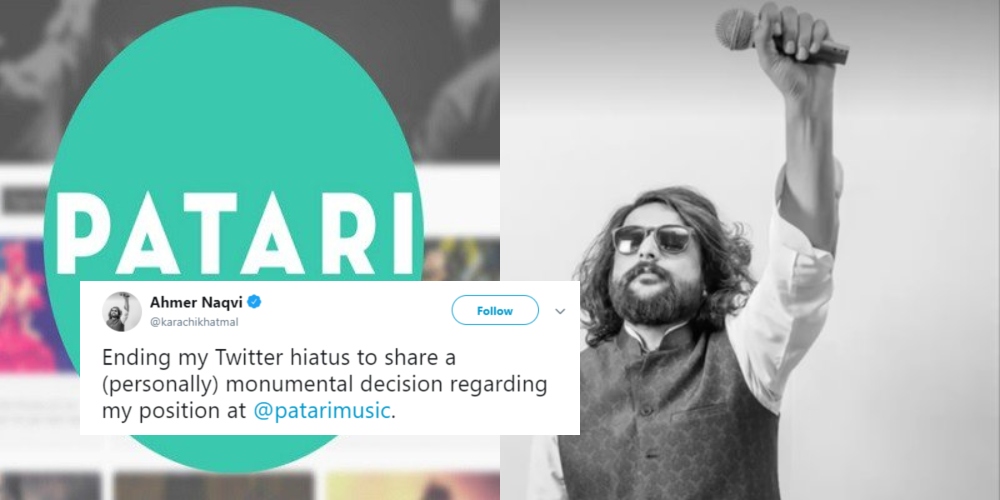 Recently, Pakistan’s known music platform, Patari was faced with a huge problem. Khalid Bajwa, the company’s CEO was surrounded by a heap of accusations about sexual harassment from different women. The victims came forward on Twitter and many instances were followed.

Around 6 noteworthy employees resign from Patari at once

The foremost employee of the company being Ahmer Naqvi. In fact, he released a big statement on Twitter regarding the whole epidemic of controversy surrounding the company. Ahmer also revealed some controversial practices that followed after the removal of Khalid Bajwa from Patari. Here is what he wrote:

It is with great sadness that we, the undersigned, resign from Patari. It is a company where we can no longer work freely under the values that brought us to it – and which are now under threat.

While we waited for this audit to complete, all trust within the company was destroyed. Members of the company’s leadership, namely Mr. Bajwa along with co-founders Faisal Sherjan and Humayun Haroon, violated the company’s governance, undermined ongoing projects, and threatened the roles of the company’s management. During this time, Mr. Bajwa, who was asked to take leave from company matters while the audit proceeded, continued to operate with external partners as representing the company. An internal meeting made clear that some of the co-founders thought Mr. Bajwa had been unfairly victimized, and that further there was no room for many employees, including many of the undersigned, to remain in the company.

The immediate threats to our livelihood, our love for our work, and our futures enacted tremendous pain. It felt clear to us that while Patari, which had always sought as on organisation to champion progressive ideals to the world, the co-founders were refusing to apply the same values to one of their own. One example of this hypocrisy was seen through the consistent online hatred faced by Patari employees, especially women, on social media by commenters who have continued to associate Mr. Bajwa’s actions with them – with no basis. But while  these employees remained silent in order to respect the audit’s process as it continued, Mr. Bajwa continued to represent the company, ignoring the tremendous damage and trauma being faced by his erstwhile colleagues.

Patari is built as a company that enables livelihood, work and future not just for employees – but hundreds of artists on whose work the company is built. For most of us, joining and working at Patari was an emotional and an ideological calling, and we genuinely believed in the vision the company displayed. Consequently, we worry now about further damage to the brand and its mission without greater scrutiny, structure, and foresight. We are leaving the organisation now because we believe that continuing to work under these circumstances will be tantamount to abandoning the values and vision of the company we had joined.

It should be pointed out that the board has completed a comprehensive audit which will be providing recommendations for the organisation moving forward. We appreciate these efforts, and the efforts taken to conduct the audit. We also trust the recommendations, though we personally feel unwilling to return to Patari to work with the co-founders, and rebuild the damage to the brand and its ethos. We hope that the company returns to its values, and are hopeful the audit will help ensure that.

We would like to thank some members of the Patari organization that continue to act in good faith and standing – our investors, Sarmayacar and their lead Rabeel Warraich, and Iqbal Talaat (CTO and co-founder), and a number of employees that continue to work at the company. Unfortunately in the company’s current environment we believed there was no room for us, our values, or our work.

We would like to thank everyone that supported Patari and us, and despite this all, we will hold on to the love you sent our way.

It was also strongly rumored that Khalid Bajwa has been reinstated as the CEO and people were absolutely outraged by it. But the company has leapt forward with a statement, ensuring no such action to be taken.

1/2 Contrary to rumors circulating on social media, Khalid Bajwa has not been re-instated as Patari’s CEO.

An independent company wide audit had been initiated, which has now concluded. Recommendations ensuing from that audit will be issued to the company Board to take…

2/2 appropriate decisions in due course. Any queries in this regard should be directed towards info@patari.pk

1/3 This company statement is for immediate release with a more comprehensive statement to follow.

After a two month audit and negotiation between Co-founders and principal investor:

2/3 Bajwa removed as Board member and from any role with Patari
3. Audit concludes with full recommendations to be implemented by a reconstituted Board, with Co-founders agreeing to abstain from voting
4. Patari has zero tolerance for abuse of power, sexual harrassment…

3/3 and for creation of toxic culture
5. Thorough process will be followed to redress all serious allegations.