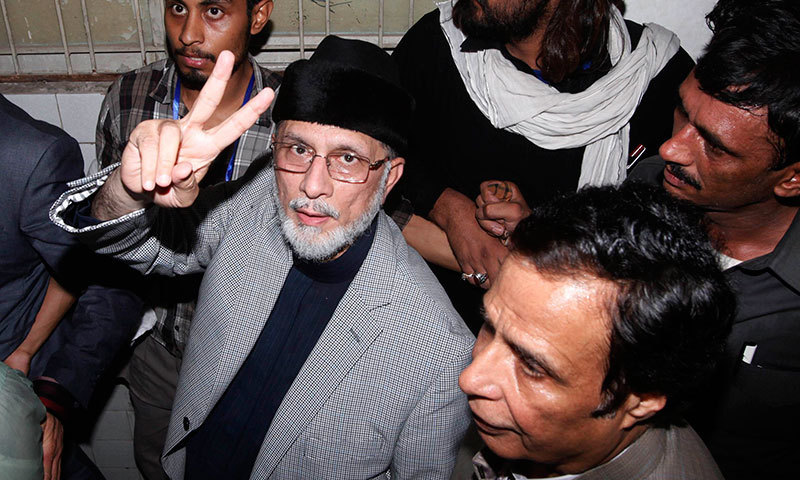 During the meetings consultations and discussions were held over the next plan of action to be taken regarding the formation of an anti-government grand alliance, which would be announced tomorrow on June 16.

Earlier during the day, chief of Tehrik-i-Subah Hazara Baba Haider Zaman and Pakistan Peoples Party leader Shaukat Basra and Makhdoom Shahabuddin also called on Dr Qadri and discussed the prevailing situation and the future course of action to be taken.

The Muttahida Qaumi Movement (MQM), Majlis-i-Wahdatul Muslimeen (MWM), PML-Q and Sunni Ittehad Council (SIC) have agreed to Qadri’s invitation and will be attending the meeting.

The meeting headed by Dr Qadri will discuss a future joint action by all the parties.

Earlier, an anti-encroachment drive was conducted by a contingent of police personnel in order to remove the barrier outside PAT chief Tahirul Qadri’s Lahore residence.

Upon receiving resistance by Qadri’s supporters, police baton-charged and fired shots at the protesters who in turn began to hurl rocks at them.

A violent clash erupted between the police personnel and PAT supporters that killed at least seven people including women and injured over 80 others following which Dr Qadri returned to Pakistan.

Previously on May 30, PAT chief Dr Qadri and PML-Q leaders Chaudhry Shujaat Hussain, Pervaiz Elahi and Moonis Elahi had agreed to join hands to launch a struggle for â€œdevolution of powerâ€ after a meeting held in London.