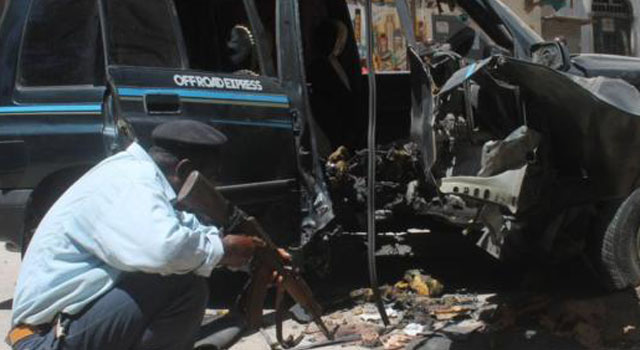 Fresh casualty comes day after a legislator was killed and another injured in a car bombing claimed by al-Shabab.

Armed men have assassinated a Somali parliamentarian, police and witnesses say, the second such killing in 24 hour.

The killing occurred close to where another legislator was killed the day before in the capital’s Madina district: Isak Mohamed was killed when a bomb concealed in his vehicle exploded in Mogadishu’s Hamarweyne district, near the port and close to the heavily fortified government district.

Mohamed Abdi, another MP, was wounded in that attack.

“All of them are targets of the mujahedeen fighters and they will be killed, one by one,” Abdulaziz Abu Musab, al-Shabab spokesman, said.

The assailants escaped after the killing on Tuesday, witnesses and police said.

The attacks come as the government holds the third and final day of a security conference hoping to tackle continued attacks by al-Shabab.

Al-Shabab have been driven out of fixed positions in Somalia’s major towns by a UN-mandated African Union force, but still regularly launch attacks that include bombings and guerrilla-style raids.

No one immediately claimed responsibility for Tuesday’s assassination, but al-Shabab said they carried out Monday’s attack which killed Isak Mohamed.

“The mujahedeen fighters targeted and killed one of those who claimed to be ‘legislators’ and injured another one,” Abu Musab said.

“Those apostates were helping the infidels.”

Recent al-Shabab attacks have targeted key areas of government or the security forces, in an apparent bid to discredit claims by the authorities that they are winning the war against the Islamist fighters.

In February, al-Shabab fighters carried out a major attack against the heavily fortified presidential palace, killing officials and guards in heavy gun battles.