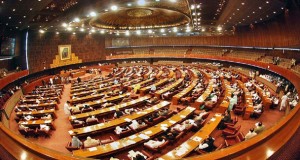 Conflict and crisis, go hand in hand. Often the voice which needs to be heard is hushed by the the power sponsored motions and that pushes the probability of its resolution to the time when it would be too late.

Pakistan’s population is often neglected like that, from its own people. Similar were the incidents that took place during the Parliament session on 2nd September 2014. The two speeches of Aitzaz Hussain and Javaid Hashmi were the highlights apart from the vocal glitch by Prime Minister Nawaz Sharif. The two members of the Parliament may be criticized to add to the political polarization but they did open the eyes of the drowsy members and confused following of all the sides involved in the ongoing conflict.

During the first session, Hashmi pointed it out that despite being the Supreme body, Parliament has not been able to cater to the Nation which voted to make its existence possible. Â Hashmiâ€™s speech during the joint session of Parliament should serve as an eye-opener for all sides involved in this current crisis. His anger may be seen as over emotional bashing but he was right when he accused the elected Ministers for disappearing once elected and that simply threatens the trust in the Government. He reflected how a country like Pakistan is in dire need of efficient measures which the Parliament has failed to attend to. Hashmi disagreeing with Imran Khan and leaving the party did disappoint people but his speech highlighted the righteousness of Khan’s concerns. Unlike most of the speeches, he urged the Parliament to not isolate Khan as his objective to form a better Pakistan is shared by millions of Pakistanis who are a part of this country and this Parliament owes it to them. Moreover, he negated Maulana Fazl-ur-Rehman’s accusation of trying Imran Khan for treason, he said Parliament should be tried for lack of its performance instead. This definitely was a reminder that Parliament must play its role rather than stooping down to personal attacks on PTI’s chief. Hashmi shook the political ignorance even while leaving, no wonder he has been known to be rebellious.

On the other hand, Prime Minister was backed by the lawmaker and member of PPP, Aitzaz Ahsan. He started off with thanking the Tsunami and Inquilaab leaders for compelling the Prime Minister to actually come to the Parliament Session. Moving on to the main part of his speech, he reminded all the parties of Parliament’s actual role. Despite the protest being unjustified to a certain extent, he urged the Parliament to restore its role of being the sacred institution which can solve such political crisis on its own.

It would be wrong to rely on Judiciary and Army to come to the political rescue as it is not their job, however their roles were commended by the majority. However, Parliament should step up and put an end to this crisis instead passing resolutions either in the Cavour of someone or against it. It is perhaps to late to experiment for the sake of satisfaction of personal egos, it is time to serve the public interest.