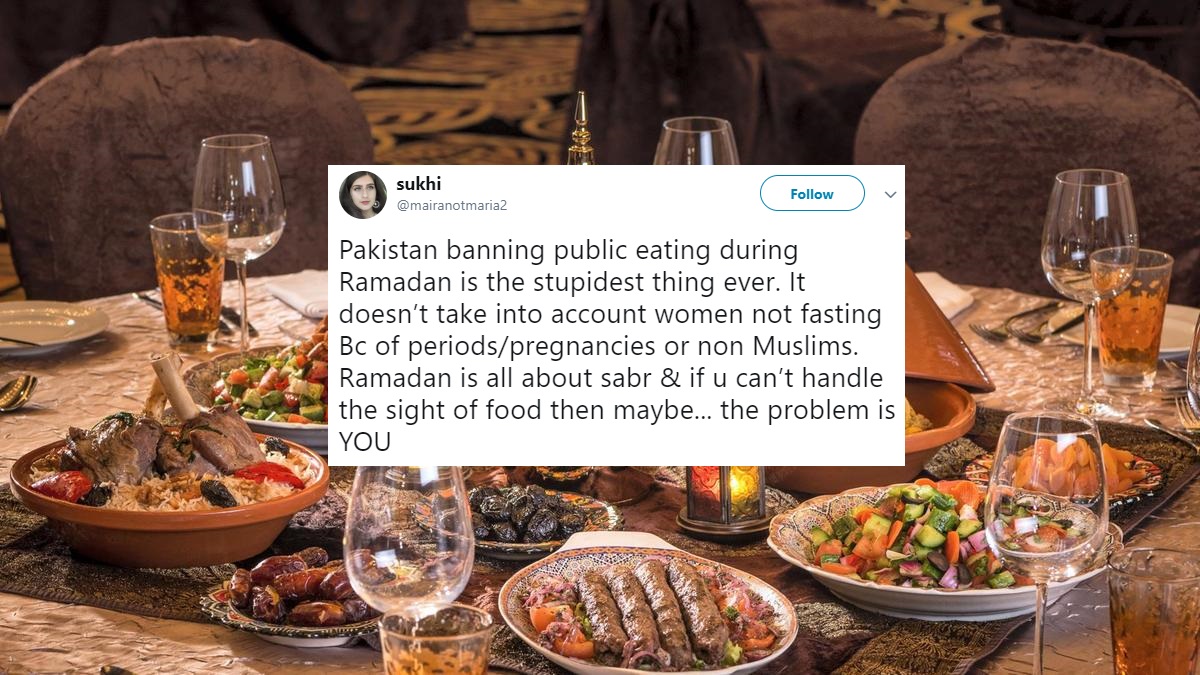 The Senate Standing Committee on the Religious Affairs gave a green light to the Ehtram-e-Ramadan Bill a few weeks before the commencement of the Holy month. According to the new bill, the Pakistanis are not allowed to smoke or eat in public during Ramadan. In addition to the clauses of the law, anyone not abiding by the bill will be penalized for rs. 500 along with 3 months of imprisonment.

With the passing of the new bill comes changes in the fine structure to cinemas, TV channels, and the local restaurants. Cinema houses to be charged rs. 5,00,000 and hotel/restaurants rs. 25,000 if they fail to comply with the clauses mentioned in the ordinance.

Pakistanis and Muslims in other parts of the were furious on how this bill totally removes the needs of pregnant women when they go out in public as they will not be able to eat. This also includes that those women who are on their periods will not be allowed to drink or eat in public.

Pakistan banning public eating during Ramadan is the stupidest thing ever. It doesn’t take into account women not fasting Bc of periods/pregnancies or non Muslims. Ramadan is all about sabr & if u can’t handle the sight of food then maybe… the problem is YOU

In Addition to Pregnant Women and Women on the Periods, Minorities Living in Pakistan Won’t be Able to Eat in Public Either

This point raised a lot of fingers as well – given how minorities deserve a right of their own!

It’s so disappointing and careless that Pakistan has banned public eating during Ramadan. This makes Ramadan hard for girls who are on their period, pregnant women, minorities, children, and those with illnesses. It’s not Islamic and just completely wrong.

If you agree with the ban on public eating and drinking in Pakistan during Ramazan, then don't complain about the bans in other countries like the beef ban in India and the headscarf ban in France. (Via Pakistan Voter)

did pakistan really ban public eating? just when you think a country can't get any worse

Given How this Gives No Respect to the Minorities, SPOT ON!

If you think public eating should not be banned in Ramadan due to kids, patients and monorities, and Ramdan Bill is not what Islam teaches us, then I need your support to raise voice against Ramadan bill.

We are planning a hashtag for it soon.

If you agree with the ban on public eating and drinking in Pakistan during Ramazan, then don't complain about the bans in other countries like the beef ban in India and the headscarf ban in France.

Ramadan indeed is all about sabr. We starve ourselves for hours and continue offering for the Almighty. Even if someone who is unable to fast is eating in front of us in public should not have the capacity to question the strength and imaan of Muslims who are fasting.

Banning on public eating is an absurd decision, and the government needs to take lighter action against this.