Pakistanis Are Respecting Asif Ghafoor After His Reaction To India's 'Rafale Pooja'!

Since the idiotic supremacy, Prime Minister Narendra Modi has taken over India, the image of a progressing nation has now burnt down to ashes. The vile decisions of the Indian Premier leading towards the destruction of humanity and especially, Muslims in the name of ethnic cleansing is now uncurtained in front of the whole world. In such turmoil, the war rumors between Pakistan and India are giving out strong vibes as the first French Fighter Jet Rafale recently reached India and was welcomed with a lot of coconuts and lemons. 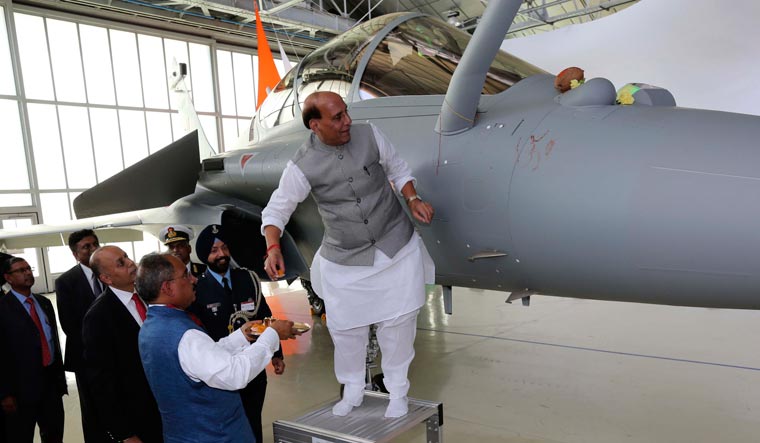 With the passage of time, Director General Inter-Services Public Relations (DG ISPR) Asif Ghafoor has turned the ‘Pakistan first’ slogan into reality. Confronting enemy claims sensibly and then responding to it in the wisest way possible even lead to DG ISPR’s posters surfacing with a strong message in Indian Occupied Kashmir (IOK), previously. Earlier this week, India finally got its hands on the first of thirty-six Rafale fighter jets from France but the unexpected cultural practice has now even got Ghafoor’s mindful response.

Adhering to the respect to not hurt anyone’s cultural sentiments and praising Pakistan’s “Shaheen”, DG ISPR Asif Ghafoor tweeted, “Nothing wrong in #RafalePuja as it goes by the religion and that must be respected. Please remember… it’s not the machine alone which matters but competence, passion, and resolve of the men handling that machine. Proud of our PAF Shaheens. #PAFTheMenAtTheirBest!”

Nothing wrong in #RafalePuja as it goes by the religion and that must be respected.
Please remember….it’s not the machine alone which matters but competence, passion & resolve of the men handling that machine.
Proud of our PAF Shaheens.#PAFtheMenAtTheirBest

Well, India’s long confirmed agreement with France to buy thirty-six Rafale fighter jets for future safety has recently entered its acquiring stage. The decision was made after numerous adamant blunders were made by India’s so-called experienced pilots regarding their lost MiG 21 fighter jets. This week when the first fighter jet was delivered, Indian Defence Minister Rajnath Singh out of nowhere brought coconuts and lemons in the acquiring ceremony to keep the newly added Rafale safe from evil.

Later then as the pictures from the affair went viral on the internet the world had a good laugh because it seems like ‘first India bought Rafale to protect it then bought lemons and coconuts to protect Rafale’, why though? Nevertheless, the jokes cracking session is now over as every culture and its practices deserve respect no matter where it belongs to. Apparently, on DG ISPR’s urge to respect ‘Rafale Pooja’, Pakistanis are feeling proud of their favorite army personnel.

Alhamdulillah
We have the best soldiers, captains and fighter pilots in our Air Force.
Proud to have PAF.
🇵🇰🇵🇰🇵🇰@peaceforchange#PAFtheMenAtTheirBest pic.twitter.com/Mt4T993tZ8

These shaheens always made us all proud sir. Long live Pakistan

That's why I didn't make any comment on this #Rafelpuja because same thing I learned from my mother that all religion must be respected.
Proud of you Mom ❤️

That’s what everyone should understand!

Yess that is what i meant but here no one understands. We should respect the religions of others. Professionals 🇵🇰♥️

At this point in time, when Pakistan and India’s bilateral relations are near to deteriorate completely, the escalating conditions of Indian Occupied Kashmir (IOK) is adding fuel to the fire. Since India received its first Rafale fighter jet from France, the world is in a laughing hysteria asking what’s all that ‘nimboo’ about. Nobody knows what Pakistan’s naive neighbor is going to entertain the world within the future but whatever it will be, it sure will provide another great trolling session for the world.