Pakistanis Had The Most Priceless Reactions To Valentine's Day

STOP RIGHT THERE. If you were thinking how to spend this Valentine’s day, abort everything. If you are in Pakistan, your plans just got tossed out of the window, courtesy of our government.

Today is 14th of February. You know what day it is. It is the day when you were supposed to go out with your loved one and express your love to them and more (pun intended). You were also supposed to wear anything red to mingle in the notion of Valentine’s day. But then you realize you live in Pakistan and there go all of your plans for Valentine’s day… 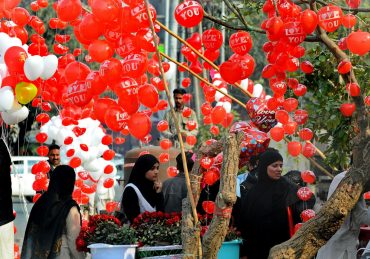 This year, our government has imposed an official ban on Valentine’s day celebrations in public. It means you cannot go out and celebrate with whomever you were about to. It also means you need to abandon those gift items, flowers, and chocolates which you were supposedly going to present your love interest tomorrow.

Yesterday was Monday and it could not get any worst for some people after the Islamabad High Court released an official ruling against celebrating it all across Pakistan with immediate effect.

While some may be crying and sobbing in a corner somewhere right now, others took to Twitter to cash in the moment and present us with some of the hilarious and priceless reactions. Safe to say, Twitter is on fire!

We ban love, harbour and promote hate and terrorism. No need for any1 else to destroy #Pakistan, we are good at it on our own#ValentinesDay

Court verdicts and warnings from religious clerics can not stop people from loving. How do you ban emotions and feelings? #ValentinesDay

High Court has imposed ban on celebrating #ValentinesDay to control rapid growth of population in our beloved country.

Pakistan banned Valentine’s Day celebrations? that really was one of the biggest challenges to the country

‘Bike Is Not A Public Place.’: Pindi Boyz To Islamabad High Court#ValentinesDay pic.twitter.com/bwD7vnGSYe

Islamabad high court BANS Valentine day. However, anything to do with HATE has state protection #Slowclap

Instead of banning Valentine’s day, why don’t they make it mandatory to teach people sex Ed? Would do more by the current look of things

A moment of silence for all those who were thinking to go out and celebrate Valentine’s day.

What do you guys think about the latest ban on celebrating Valentine’s day? Hit in the comments!

These Are The Valentine’s Day Special Deals You Can Avail Even If You Are Single!
Nigar Johar – 3rd Woman In The History Of Pakistan Army Promoted To Major General Rank
To Top