Named after the national poet of Pakistan, Allama Iqbal Open University (AIOU) is one of the oldest and well-known universities in Pakistan. However, it seems like the university has angered thousands of Pakistanis across the nation with the question that seems highly unethical and inappropriate to be asked.

The students of Matric class were asked to give an opinion on the “personality of your elder sister” as an essay topic. While the topic itself sounds extremely bizarre, the “aspects” that were asked to highlight in the essay sound rather vulgar than decent. Here’s what the essay topic was: 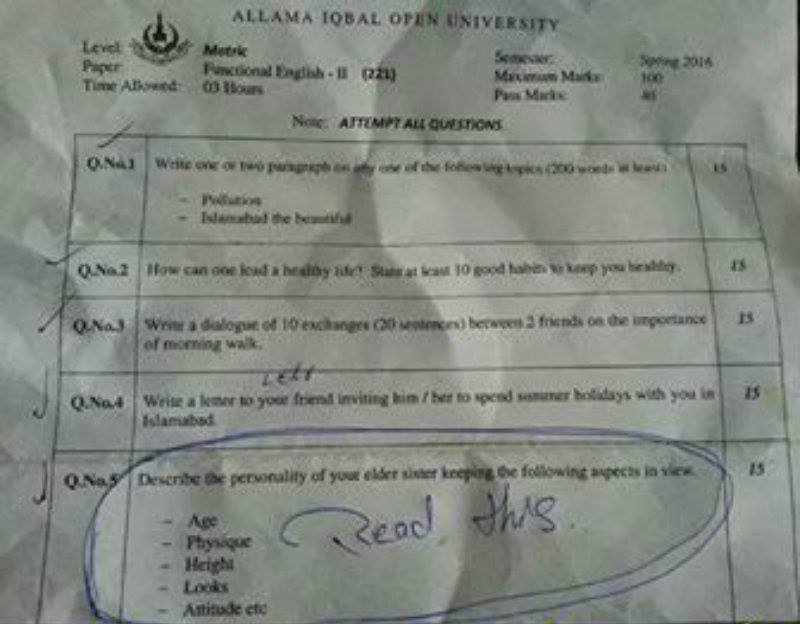 Describe the personality of your elder sister keeping the following aspects in view:

Matric students understand the importance of writing the 15-marks question as it can literally change the position and score of your paper. Given that no student would ever miss out on a chance to write an essay, it seems extremely disturbing how the faculty formulated such an unethical question where 16-year-old students had to describe the “aspects” of their sisters “in detail”.

Pakistanis took the matter to social media and expressed rage and anger on how “stupid, offensive and extremely vulgar” the question wasnand that “the head of this department needs to be sacked.” 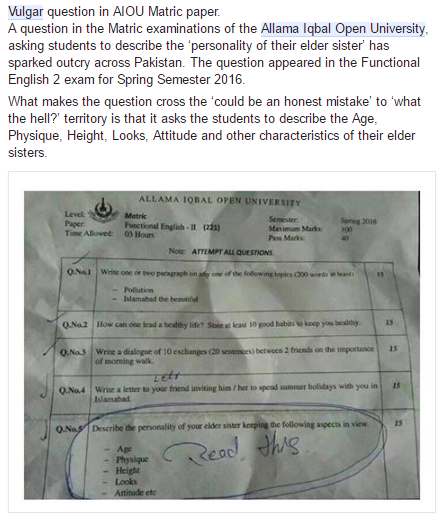 Educational institutes continue creating a buzz in this sector with their “mistakes”. May it be private institutes banning languages due to lack of obedience in their schools or schools over-charging the parents, the education sector of Pakistan lacks accountability that they once had.

Regardless of what one may say, asking such questions in the examination is highly inappropriate and shows teachers lack responsibility and the mindsets that are needed to educate students. If your faculty is making such “mistakes”, how do you plan to education your country’s tomorrow?

The System Of Education In Pakistan

From years, we see how the curriculum books that were once used by our parents still come handy. From the likes of Mr. Chips and A Man Who Was A Hospital, our educational board in Pakistan ignores how we lack change in the educational patterns. Punjab Text Board continues to provide curriculum to students that is now, decades old.

Aside from this, the marking system of matriculation and intermediate system costs many children to commit suicide every year. The biasedness of our education system continues to emerge with no chances of change.

These Ladies Comparing Ages And Getting In An Argument Will Be The Best Thing You See Today
This Woman Is Travelling To 196 Countries In The World And Will Be Coming To Pakistan Soon!
To Top