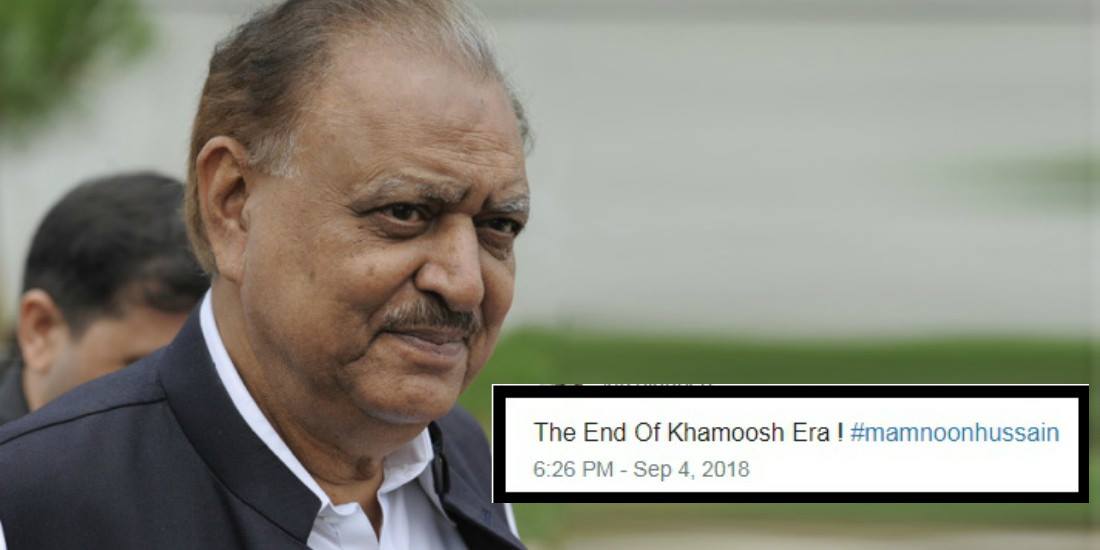 The moment Pakistan was waiting for. Yes, our 13th president, Dr. Arif Alvi candidate of Pakistan Tehreek-e-Insaaf, was finally elected yesterday and it was a joyous moment for every Pakistani out there. Alvi was contesting against joint opposition candidate JUI-F Chief Maulana Fazl-ur-Rehman and PPP candidate Aitzaz Ahsan.

And you know why it was a joyous moment for every Pakistani out there? Well, because Mamnoon Hussain, who was elected in 2013 couldn’t please many because most of the time, during his  5 years tenure, he was nowhere to be seen. Literally.

But just recently, well, during Khan sahab’s oath-taking ceremony, ex-president, Mamnoon Hussain sure caught everyone’s attention. And the way he did, was actually hilarious and let’s say… mean.

Right after our new president was elected, Pakistanis couldn’t help but shed light on our ex-president (finally brought him in the limelight). Lol.

And this is what Pakistanis had to say:

Congratulations @ArifAlvi for being 13th President of Pakistan. I believe you will pay full time to solve the problems and will not keep sitting like #MamnoonHussain waiting for sunshine.

This was actually hilarious

He has to be the president who was in power for 5 years and used the least amount of words. #MamnoonHussain

In the memory of Mamnoon Hussain.. #PresidentialElection pic.twitter.com/9yBB8LZ9xx

How can we forget ALL those memes?

We just hope Dr. Arif Alvi brings about a change for good and proves himself as a president. Good luck, Mr. President! And well for Mamnoon Hussain, thank you for your services.

Let us know what you guys think about your new president. Comment below.

These Girls will be representing Pakistan at the Telenor Youth Forum in Norway!
PTI Appointed An Ahmedi Economist And It Sparked A Major Outrage On Social Media
To Top