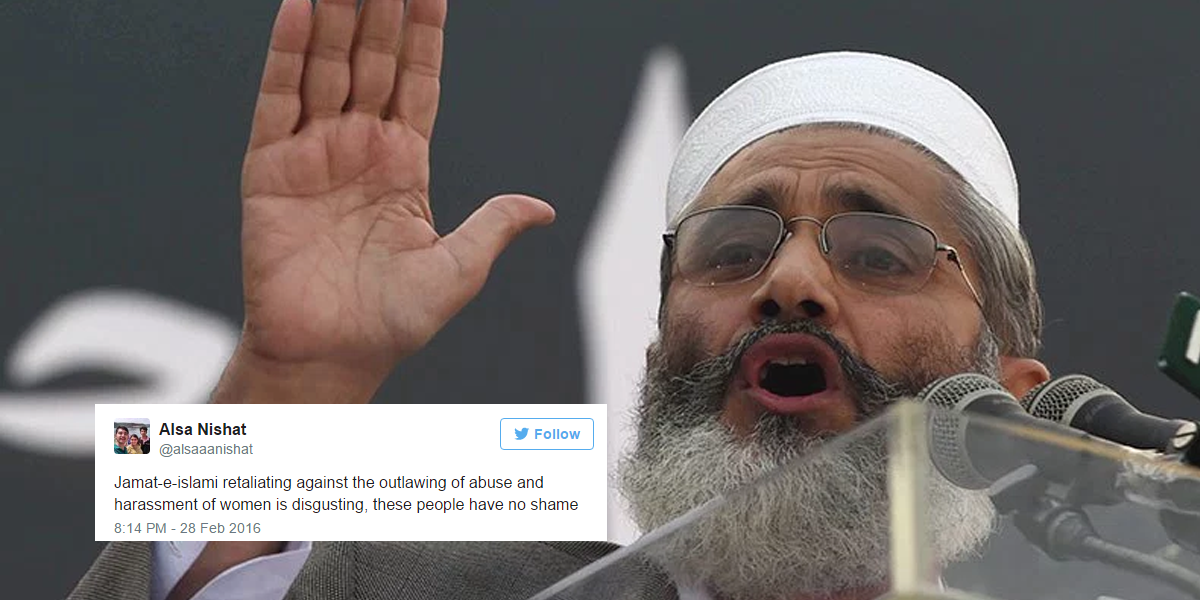 Siraj-ul-Haq, chief of Jamaat-e-Islami has denounced the bill passed last Thursday in the National Assembly that plugged the loophole in cases regarding honor killings.

This bill was to prevent those criminals, who murdered women to reclaim honor, from escaping conviction who used to be pardoned off by the survivors of the victim.

Siraj-ul-Haq branded the law un-Islamic and emphasized that any law against the teachings of Islam was synonymous to terrorism. He also claimed that this law has challenged the constitutional authority of Council for Islamic Ideology (which, by far, best described is a well privileged dirty old men’s club in Pakistan). He supported his argument by saying that the law did not resonate with God’s words by seizing any opportunity to reconcile.

Siraj-ul-Haq and his Jamat-e-Islami’s misogynistic ideology enforces the stereotype that Pakistani women are weak, oppressed, and powerless. That’s exactly why women are taking to Twitter to fight prejudice:

Your existence is against Shariah https://t.co/GgEQprVHo2

Siraj ul Haq is against bill passed against honor killings.Does he know Sharia is for an eye for an eye but the bill doesn't even come close

If this government has been banking on Siraj ul Haq's support, they can not be more mistaken. Let them take everything lightly.

And last but not the least,

The Forgotten Message of Karbala!
This Pakistani Girl Gave a Befitting Reply to Boys Who Were Making Fun of Breast Cancer
To Top