Empathy and tolerance are strong virtues and building blocks of any progressive society. Every society that abides by these particular attributes is on the right track and delivers the best for the people who are part of it. However, not the same can be said for our Pakistani society in terms of the transgender community.

God made all creations on earth and granted each a right to live that is often ceased or taken away by masses who have an agenda conflicting the values of certain people in our society. In Pakistan, there have been various instances where a particular lot has been denied their rights, and instead has been subjected to abuse and basically, neglected by the vast majority.

Yes, we are talking about the minorities who consistently face major problems in the society they are tied with. Where people are lacerated and abused for their religious orientation, there are people who are looked upon with sheer indignation just for the way God created them.

The transgender community in Pakistan has frequently faced abuse, torture, and catastrophes created by some people of our society. We have come across recurring incidents where transgenders have been denied their rights and been tossed way in forms of abuse.

But our society comprises of many open-minded, tolerant and good people as well, who realize the values and empathize with the minorities, transgenders in particular. We saw Kami Sid, first Pakistani transgender model portraying a stunning display at a modeling shoot.

It was a progress that is followed by another; this time, Rimal Ali, a known transgender actress from Pakistan has featured in a major music video by the band Soch.

Yes, Soch is back in the news with their latest song, Dhola. It contains a message that highlights the dilemma the transgender community in Pakistan faces.

This song and its video undoubtedly outgrow in standards. Soch is known to produce some of the best of music out there and this song certainly finishes along the lines.

The major aspect of the music video has to be talked about.

Here’s how the narrative of the song Dhola rolls:

Starring Rimal Ali; she’s shown as a transgender escort who is joined by few clients for her services. She changes her attitude and appearance in accordance with the clients’ demands.

Eventually, Rimal is seen breaking down in tears with a pile of wealth laying in front of her.

The real message is that the transgenders who are driven into a forced detour in their lives, who normally choose by will or are forced to be in prostitution are not happy at all by selling their bodies to unknown people. 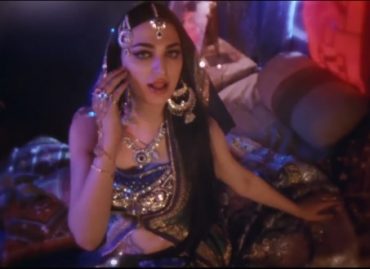 This particular music video also lays great emphasis on the fact that is more of a maddening dilemma of our society where transgenders are not provided with decent opportunities to work, hence, they are compelled to make ends meet with certain choices – regardless of how substandard they are – in order to survive.

Many transgenders have no choice than to resort to prostitution. They are human beings like all of us. Don’t you think they would want to be in a prosperous place instead?

They do crave for meaningful relationships, stable life, decent work, love, family, and respect. After all, God made them no different than the rest of human beings.

The band Soch has made a remarkable effort in highlighting the distressing fact. They have made a substantial effort in educating our society and spreading awareness in such a kickass way.

Rimal Ali is brave enough to feature in such a portrayal. One can certainly say she has stolen the show. We appreciate her effort as she plays a contemporary role in making a difference and being the voice for people like her.

We wish both the artists progress and success in every endeavor they engage. Give this great song a listen and hit the comments with what you think about it!