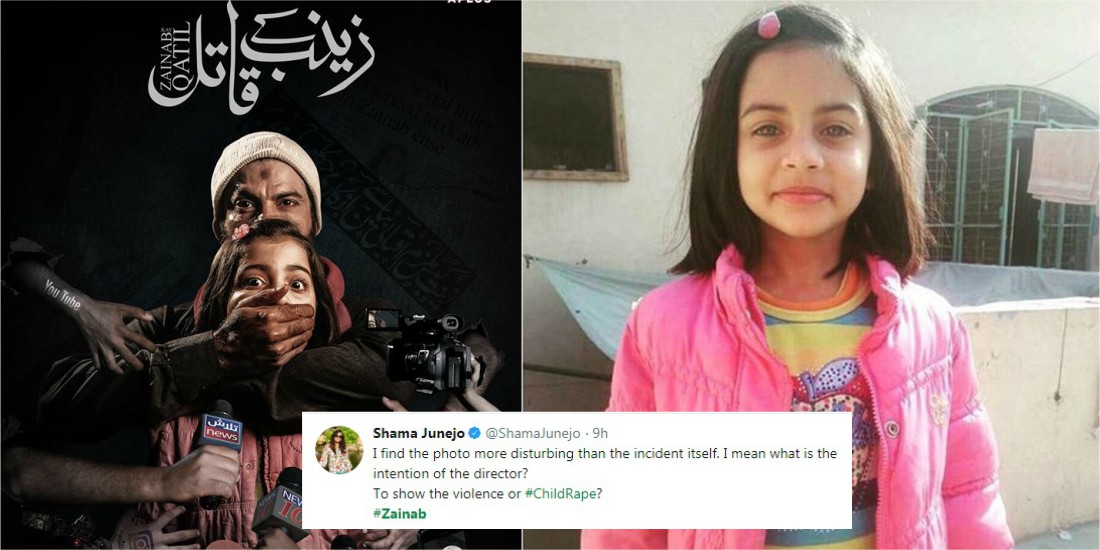 Earlier this year, a 6-year- old girl, Zainab, was raped and murdered in Kasur, Punjab. This horrific incident not only saddened the nation but also the Pakistani celebrities who condemned the murder and demanded the public hanging of the culprit. Moreover, the renowned Pakistani designer, Frieha Altaf and actress Nadia Jamil shared their childhood experience of sexual abuse. Zainab murder case also became the reason for a special performance in LUX Style Awards ‘Mein Bhi’ for the sake of awareness.

Recently, a local news channel announced that it would be airing a telefilm based on the most talked about rape case of Pakistan, Zainab murder case. According to the channel, it is an effort to create awareness among parents about the pedophiles and importance of good or bad touch. The telefilm is written by the famous novelist and playwright of Pakistan, Umera Ahmed, the same writer who penned down Qandeel Baloch’s story for Baaghi. The telefilm will be directed by Aamir Yousuf. Hamna Amir, Mikaal Zulfiqar Aijaz Aslam, Saba Faisal, Irfan Khoosat and Suhail Sameer will be also seen in the telefilm.

According to sources, all the incidents of Zainab murder case will be filmed. The telefilm will be on-air until the end of this year. But highlighting this immensely sensitive issue on TV makes people unhappy and they expressed their views on social media.

The Victim Of 23-Stabs By His Fellow Lawyer, Khadija Siddiqi Expressed Her Reservations About The Telefilm

Sensationalism. To top it up there was no consent taken from Zainabs parents before making this film. Horrendous Ways to capitalize on a serious sensitive issue that is still fresh in everyone’s consciousness. Cant imagine the anguish her parents have to relive. #Zainab pic.twitter.com/Zm85EZyXRd

Locals Are Not Happy At All…

A telefilm in being made on Zainab’s case and the poster for it is very disturbing, to me. Isn’t it too soon for making a film on that tragedy? Everything and every event should not be made into a money making media frenzy

People Raised Questions On Whether The Channel Has Taken The Consent Of Her Family Or Not?

A telefilm on Zainab’s story. This is not awareness, it is sensationalism. Awareness can be raised in better ways, through a different story on the subject. This is capitalizing on a tragedy. How will the family feel, did they consent to it? Do the profits go towards the cause? pic.twitter.com/HPf9PhDhO6

She Has A Point

I understand the cause and message in making telefilm ZainabKeQatil. But this wound is too fresh…and a child is involved here. Very painful for the parents or for anyone to relive this gruesome story…Spread awareness amd educate but don't make it painful and dehumanize it.

Do You Agree With Him?

Some tv channel is making a serial on Zainab of Kasur :s i know awareness is needed in Pakistan but it just doesn’t feel appropriate and sensitive

The Director Of The Telefilm Should Answer Such Queries

I find the photo more disturbing than the incident itself. I mean what is the intention of the director?
To show the violence or #ChildRape? #Zainab https://t.co/Ts57frYh9r

We have seen the outrage among Pakistanis when HUM channel aired Udaari, a serial on child abuse, even PEMRA had sent a notice to the channel and asked to halt the screening of the drama. What do you think about the telefilm? Would it be okay for our locals to see such a telefilm which is going to telecast all the incidents of the Zainab Murder Case? Don’t you think it’s insensitive? Share your views in the comments!