Dear Pakistani Parents, This Girl Wants You To Stop Making Marriages So Difficult For Daughters! 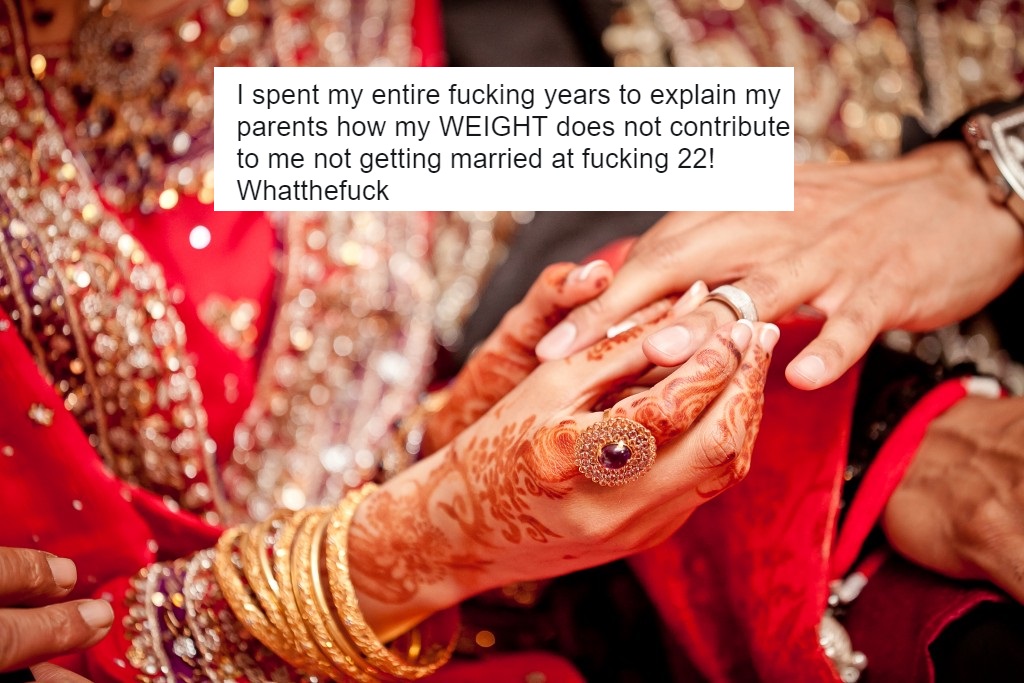 Daughters in a desi household are expected to look forward to their weddings from the day they start making some wishes. They are told to put a hold to their dreams, wait till she is married and goes to her “real home”. She is told that she must not do a number of activities, for if she does, she won’t get decent proposals. She is told to depend on another man to fulfill her wishes.

Similar to this is what this Pakistani girl who is tired of seeing what’s happening in her household regarding the aspect of marriage tried to talk about.

The 22-year-old girl, according to her relatives and her family is “fat” and her family continues telling her how she may not get a ‘decent’ rishta if she doesn’t lose weight.

A Man and His Mother Have The Authority To Reject A Girl Based On Her Appearance But Can A Woman Do The Same?

“Gori honi chaiye. Patli honi chaiye. Moti na hu. Chotti height ki na hu.” and what not. The parameters for choosing a life partner largely depend on the physical appearance of someone rather than their nature or habits which will not only make the marriage beautiful but will also reflect on the upbringing of the future generation.

But Who Cares, Right?

This Is Where A LOT Of Parents Make A Mistake!

Without realizing how the self-esteem of their daughter might be tampered or affected, parents are ‘pressurized’ to present their daughters to those families which were suggested by some third party. They don’t realize how being rejected again and again affects their own daughter – not just mentally, but physically as well.

This is not the first time the topic of rejection based on looks has been discussed. Our society is filled with examples where women and even men go through this trouble. By and large, it is mostly women who are made targets of such situation as men are given the authority to choose whenever they feel like, irrespective of their growing age. The pressure on a woman increases as soon as she crosses the limit of a certain age which is set by the society. Our religion neither imposes the consideration of looks over nature nor does it impose the required age of marriage JUST for females; it also speaks for males as well.

Our parents need to understand that the sanity of their daughters matters more than showcasing her to a family just for the sake of getting ‘rid’ of her. Understand that your daughter is a human with certain hopes and wishes as well. Support her and help in changing the prevailing disgusting norms of the society.

Read Also: This Is What Islam Says About A Woman Bringing ‘Rizk’ For Her Husband After Marriage!