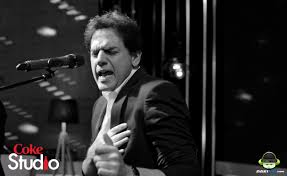 Intitially unsure of the tune, Asrar sent the basic structured track to producers, the Strings, for consideration. It appeared that he didnâ€™t want to feature his own piece in the Coke Studio. Bilal told in BTS that they gave it a try and got along with the tune. By no time they were sure the tune can do wonders with and decided to feature him with the trendy track.

Asrar has already made a mark in the Pakistani music industry through his â€˜Sab Akho Ali Aliâ€™ in the first episode of coke studio season 7. His powerful chord and high pitch resembles to number of rock stars such as Ali Azmat and Punjabi maestro of India, Rabbi Shergil. Asrar, only, depicts more potential than them. Wearing the traditional outfit of Kurta, vast coat, and â€˜gher wali Shalwarâ€™, his â€˜sufi malangâ€™ appearance uplifts the performance altogether.

Itâ€™s amazing to know that Bilal Maqsood observed Asrarâ€™s talent in one of the morning shows and was mesmerized by looking at his talent in the music. It was not long before he got a call for massive Coke Studio. Now, it appears Stringsâ€™ decision was correct to the core.

Shakar Wandan arises the feeling of happiness and merriment within you no matter what your mood is. The songâ€™s lyrics are in Marwari language, which resembles to Punjabi, but traces its roots from Dessertous Rajasthan. Coke studio, as is known for amalgamation within music and musicians, in this episode too, two musicians are seen sharing space together. Tanveer Tafu has been seen sharing the stage with Asrar and playing the instrument which is his department solely.

The Stringsâ€™ has done a great job by ensuring a balance between new comer yet talented musician and classical maestro-artiste providing a wonderful blend of music and melody. That is where Strings has made the difference in every song of every episode.

Faisal Kapadia said, â€œWe really wanted to engage the whole music industry.â€ By engaging whole music industry he meant whether the musician belonged form Pop genre or classical, from film background or pop-single, everyone who had existence in Pakistani music will be given chance this time in Coke Studio.

We can imagine how difficult a task it is for producer to tune themselves according to individualâ€™s music, out their input in it, and blend it with instruments and background music that goes with flow of the tune. Moreover, every artist has different personality and that is reflected in their music; producers have to take care of it ensuring originality of artistâ€™s music and Coke Studioâ€™s identity too. And, strings have pulled this all off with brilliance. They took this challenge as an opportunity to work with multiple guitarists at the same time and brought out best of melodic rhymes and tunes. Shakar Wandan embodies every bit of it.

Umma Talay is one of the most melodious songs of all Coke Studio Sessions. It features the greatsÂ Â  of Javed Bashir and Hmaira Channa. The composition owes to the legendary Amir Khusro. This sufi tune is written in language belonging from western Indian â€˜Hindiâ€™ often used by ancient sufi poets.

The Strings were the inventor of this melody. They immediately casted Javed Bashir the song and asked the latter to advise on the singer who would complement Javed Bashir in this Coke Studio Production. Strings wanted a female voice which had a strong, raw, high toned Sufi voice. This grand opportunity was awarded to Humaira Channa. It proved a good choice because she matched the Javedâ€™s voice with ease. Humaira sang the chorus of the song, and Javed covered the rest of it. Their voices maintained the flow of the song in a wavy manner, and best contrasted each other ensuring the harmony.

Bilal described a funny scene during the shoot when the musicians in the background looked perplexed when Javed Bashir sang a little part off the main pulse of the song. But, they understood the Javedâ€™s master piece instantly and went on with the Sufi melody with vividness.

Dheeray Dheeray is my most favorite one from fourth episode of Coke Studio. Zohaib Hasan has done it again. Right from the beginning, the song puts you in â€˜mastiâ€™ mood and it embodies that prominent touch of wonderful Pakistani music right from the beginning. With Zoheb Hasan singling the romantic song and having beauties of the likes of Rachel Viccaji and Sara Haider on his both sides gives the tune more feeling and passion. From gestures to the chords, everything Hasan has done is remarkable. As he sings the song you canâ€™t stop yourself but imagine of his epitome of his music during era of late 80â€™s. He may have been out of the scene for as long as quarter a decade, but he has come back with the bash singing Dheeray Dheeray in same fervor and passion as he sang two decades ago. I must say guitarist has done a wonderful job by filling the gap in the middle when the song slows down. Everything is just perfect about the song.

Strings must have grown up listening to his music and that shows when they asked him to appear for Coke studio sessions. They have managed to show Zoheb hasanâ€™s brilliance by putting their brilliance in to him. So, itâ€™s true when they say musician and music never dies with the time.

This episode for Coke Studio ends with melodic sensation that is Usman Riaz. As unpredictably brilliant as they are, String introduced the composition known as â€˜Bone Shakerâ€™. There was no musician or any other major instrument as they wanted to bring an essence of brilliance of Usmanâ€™s instrument. At the end of melodious solo, the flute solo completed the leftover needs of the tune.

As Usman moves with the composition, few instruments are introduced to increase the richness of the melody. Usman musical acumen is evident throughout as he plays the pacifying musical piece. It was the kind of end the melodious episode deserved.