Voted by a travel website called MissTravel, Pakistani men were ranked as 3rd hottest men in the world, whereas Australian men ranked 2nd and Irish men topped the list.

With the likes of good looking men such as Fawad Khan, Hamza Ali Abbasi, Hasnain Lehri and hundreds of other names, not to forget our men from the Pakhtun culture *ahem…chai wala…ahem*, of course, women from all around the world are bound to go crazy for our men.

While the survey is two years old, a Facebook page called Attractive & Health Men recently republished the video and people from all around the world started sharing how Pakistani men deserve to be in the 1st place and not on 3rd.

The list had the following top 10 countries as the sexiest men:

Here’s the video which was shared recently:

The video posted by the page originally made two blunders – one, it quoted Bollywood to be a part of Pakistan and two, it had Indian actor Siddharth Malhotra in the list of Pakistani men. To this, this person made a very interesting correction: 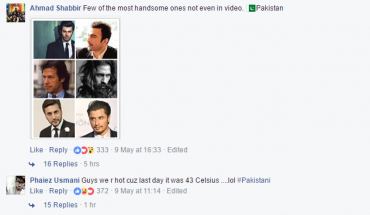 A message to the local media – we need to start using such positive news as means to create a pragmatic image of our country. Look at the way people from all over the world are talking about our men. Similar to this was what happened back in 2015 when everybody, hands down, encouraged how Pakistan fully deserves the 3rd position. Perhaps we can finally create a better image on international grounds, eh?

A message to the Pakistani girls – admire the Pakistani men, ladies. The grass does not always have to be greener at home, right? 😉