A Pakistani Hacked the Official Account of Indian Film Veere Di Wedding and the Ransom is Hilarious!

Didn’t Pakistani hackers just make to the worldwide news by hacking the systems of HBO and releasing their episode earlier than scheduled? Well, the local cyberspies are back and this time they attacked the official account of an upcoming Bollywood film, Veere Di Wedding.

Kareena Kapoor and Sonam Kapoor-starrer film’s official Instagram was compromised and as per the hacker himself, he or she is a Pakistan. While we may not be able to figure that out, the ransom made by the hacker surely proves the person behind this wanted everyone to know his or her intentions.

According to a Member of the Film’s Team, Here’s What Really Happened

“We had noticed the development and others had also informed us about it. We immediately reported the hacking to the Instagram headquarters in Mumbai and retrieved [control of the account]. It was hacked for about 90 minutes, allegedly by a resident claiming to be Pakistani,” 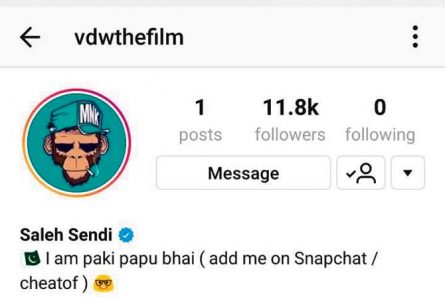 “He went live and spoke mainly in Arabic, announcing that he’d return the account if the producers gave him a role in the film.”

Indian publications have also mentioned that the hacker’s ransom was to get a role in the film, which not only seemed absurd but wasn’t doable either. The hacker expressed his or her desire to work next to the Kapoors in the live transmission which went through the account.

While the account was retrieved within 90 minutes, the hacking event left quite an impression that the core team of the film still hasn’t made any comments regarding the incident.

Pakistanis sure know how to stun the Indians, don’t you think?