Ah…the typical India-Pakistan feuds. If you are an active user on Twitter, you will often notice how Indians poke their nose in the business of Pakistanis while Pakistanis…well, they just continue to troll them in return. Knowing how good trollers Pakistanis are, they never leave any moment of trolling the citizens of our ‘friendly’ neighbor.

There were a number of Indians who mocked the recent edition of Pakistan Super League (PSL). On the other hand, Pakistanis are pretty much enjoying the thrill they see in the Indian Premier League (IPL). This proves that Pakistanis don’t even feel the need of mocking them…until you poke the lion!

Legendary Indian actor Rishi Kapoor uses his Twitter space often to interact with his fans. Earlier today, he made the following tweet, commenting on Pakistani players in IPL:

As a response to this tweet, Pakistani Twitterati Fariha Awan gave the following reply:

How fucking ignorant is this person? https://t.co/VZvxmsNwSz

While the actor made his tweet ‘unavailable’, luckily, we have a screenshot! 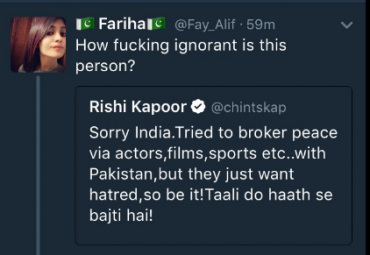 Here’s where the fun begins: Rishi Kapoor ACTUALLY replied to Fariha’s honest, yet brutal response in this tweet:

Mind your language young lady! Surely your parents did not teach you to speak to elders this way? https://t.co/btm5Kn8fQj

On the other hand, the Pakistani kept responding in her way:

My parents taught me very well sir, but this morality lecture doesnt justify your ignorant stance. Look how other countries treat spies 🙂 https://t.co/OJ9tCmDKqd

I was talking about your language not morality. Perhaps that’s the way you address elders there https://t.co/augGKGwTfK

And here’s how Fariha replied:

Trying to get this legend of an actor to see facts so the opinion he shares doesnt incite hate,but all he sees is my langauge. Chalein ok 🙂 https://t.co/S7SpP6JOb6

Eventually, given how the replies were getting TOO fierce, Rishi Kapoor blocked Fariha to put an end to this feud. 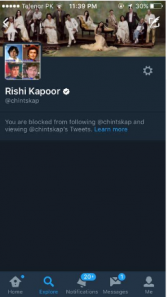 Rishi Kapoor also made this separate tweet after blocking Fariha:

These girls abuse and when exposed they make their tweets unavailable. Such is their conviction lol

There is no denying on how the actor has often, without any cowardliness, shown how he wants both nations to mend their ways. However, this particular tweet is bound to flare Pakistanis, knowing how we actually do like to mind our own business and we are never the ones to pollute the minds of our citizens regarding India.

Is Lionel Messi’s 4-Game Ban A Conspiracy? Will He Ever Be Able To Win An International Trophy?
Super Model Amna Babar Was Bullied Online But Owned The Situation With A Badass Reply!
To Top