Uh-Oh! You Won't Believe Why This Female Police Officer Got Fired!

The police department of Pakistan is now trying its level best to regain the potential strength and discipline it once had. In order to do so, disciplining them is the key.  So it might surprise you, why this female police officer got fired for doing something, which might seem trivial to everyone else.

Now it happened so that a female police officer being fond of TikTok decided to make a video for her followers. However, it completely slipped her mind that what she was doing might be offensive to the department she was serving. To make matters worst, the young officer was also wearing her police uniform, which a great offense.

Hence, the minute her TikTok video went viral, she was given a letter of termination and got fired immediately.

This Pakistani ex-police officer was stunned and is now requesting her department to please reconsider and provide her a warning and probation. She mentions that she was also unaware of the situation and the offense which is why she didn’t care if what she was doing would cause her to lose her job.

EX Lady Constable Wafa who got dismissed for making tiktok videos telling her financial condition she is only bread earner for whole family ..
She must be reinstated on compassionate grounds 🙏 pic.twitter.com/wc7J8dmpDc

In addition, we get to see that TikTok is one of the most widely-popular apps to be used in Pakistan. Comparatively to last year, TikTok is now the top leading applications with more than 11.8 million downloads.

According to the American Intelligence company, the number of TikTok downloads is bound to cross the figures of WhatsApp. WhatsApp downloads stand at 18.2 million.

Wow! No wonder the Pakistani public has a lot of spare time on their hand. Don’t they?

Regardless, of the situation, we are still not sure if this Pakistani police officer will get another chance to continue with her services to the police department.

Is TikTok really good for us?

Simultaneously, it seems that TikTok has been affecting the minds of Pakistani public quite often. Other than body shaming, and privacy invasion, one thing is for sure, TikTok is becoming hazardous to not only one’s mental health but also to their career.

We wonder when this TikTok frenzy end so that people can return back to their normal and societal lives for good. Although, the Chinese application, is influencing and forming an entire industry of inspiring teens. 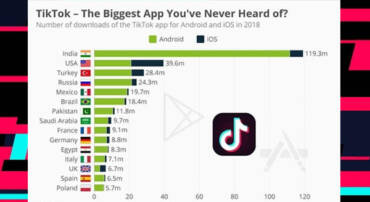 There is also a chance that through this application, many people are losing their own potential cognitive abilities. Plus, it is also giving room to the aspect of classicism in the society.

Most people think that individuals belonging from a lower class or lower-middle-class would be interested in the application, hence the emergence of classicism has also been influenced due to Tik Tok.

However, we also get to see how anything that is used in moderation, will not affect us. So we suggest, enjoy leisure time, even use the app, but always make sure that there isn’t an imbalance. After all, there is a fine line between moderation and addiction.