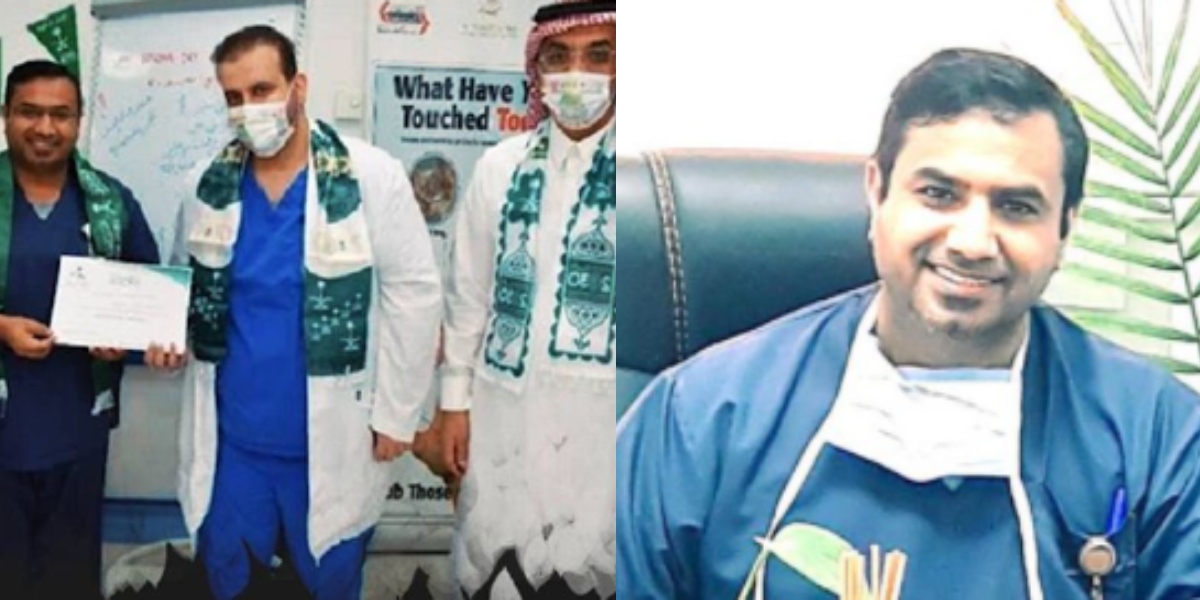 Shahzad Ahmad Mumtaz, a Pakistani doctor in Saudi Arabia, has been praised for his efforts against the COVID-19 pandemic. He has also lowered the rate of fatality in the country during the pandemic.

During a telephonic interview to Arab News from Riyadh, Shahzad said in recognition of his services as head of the Intensive Care Unit (ICU) at the King Salman Hospital, he was given a leadership award and an appreciation certificate by the Saudi Health Ministry.

Dr. Mumtaz was presented with the award during a ceremony to mark Saudi National Day on September 23. The Pakistani doctor hails from Layyah, a city in southern Punjab. He has been working in Saudi Arabia since 2002.

According to Dr. Mumtaz, when the COVID-19 pandemic initially spread in Saudi Arabia, the rate of mortality at the King Salman Hospital was very high. This is why he was brought at the hospital as the ICU head.

I have not taken a single leave in the last 5 months, said Dr. Mumtaz

The Pakistani doctor helped to increase the hospital’s capacity to deal with the challenges posed by the pandemic. He was able to bring down these deaths by nearly 10% during the last five months. This was primarily due to better team management and greater use of modern techniques and technology.

Dr. Mumtaz said, “The mortality rate related to Covid-19 in international ICUs is around 30 percent since very critical patients are shifted to these units. The ICU at the King Salman Hospital has remained under 10 percent during the last five months. During all this time, I have not taken a single leave and have worked for 18-20 hours a day.”

“After Joining, I immediately expanded the ICU from 14 to 60 beds. We used the helmet technology that is mostly preferred in Spain and Continuous Positive Airway Pressure, which is recommended by Americans. They both produced impressive results in our hospital during the pandemic.”

Pakistani doctors sacrificing their lives for well-being of patients

Dr. Chaudhry worked in the General Surgery Department at Hira General Hospital in Makkah. He was an important frontline healthcare practitioner of the medical team in Saudi Arabia fighting against COVID-19 in the Makkah Al-Mukarramah region.

Since the last few months, Saudi Arabia has recorded a massive decline in COVID-19 cases. The total number of recoveries in Saudi Arabia increased to 315,636 after 843 more patients recently recovered from the virus. Meanwhile, 4,625 people have succumbed to the virus in the kingdom.

The COVID-19 also forced Saudi Arabia to reduce the size of hajj pilgrims. The hajj this year was downsized as the government of Saudi Arabia fought to prevent a coronavirus outbreak during the five-day pilgrimage.

Only up to 10,000 people already residing in the kingdom were able to participate in the hajj. The number is a tiny fraction of the 2.5 million pilgrims from around the world that attended last year.

Pilgrims were required to wear masks and observe social distancing. Those selected to take part in the hajj were subjected to temperature checks before they begin performing the rituals. Electronic wristbands were also given to some pilgrims. Authorities monitored their whereabouts.

J. Signs Two Ertugrul Stars As Brand Ambassadors
Did You Know 12000 Families In Pakistan Have Been Living In Caves For 10 Years?
To Top