Pakistani Celebrities Participate In The Climate March To Raise Awareness|Parhlo.com

Pakistan held its very first climate march and a bunch of people participated even including prominent celebrities.

The Importance Of The March:

The concern of climate change or global warming is still looming around as the condition of the Earth is worsening. Global warming is an issue that everybody claims to be a huge problem but no one is demonstrating change through their actions. It isn’t only about the Earth becoming warmer but that warmth is giving rise to a bunch of complications. These problems include animal extinction, rising sea levels, and even long-going wildlife fires.

As the normal conditions of nature change, people and animals have to adapt to those changes in order to survive. Moreover, our climate is seeing a rapid change because of our own actions so it is the responsibility of humanity to struggle out a solution. Not to mention, these actions are easy to initiate as they don’t involve excessive work. Something as simple as placing rubbish in the trash cans or preserving water, can have profound, positive effects on the Earth.

The march was organized by Climate Action Now, and more than twenty cities from Pakistan participated in it.

The event in itself has been inspirational as young activists grabbed their signs and raised their voice. The audience during the march was diverse as well. People ranging from their early teens to late 60’s, all stood against the same issue. The climate march has been occurring all over the world. It was first started by the countries located in the Pacific region, as they are the first-hand victims of global warming and rising sea levels. Nevertheless, it is always impressive to witness people stand up for an issue that can potentially destroy the very planet.

The Participation Of Pakistani Celebrities:

Regardless, it is for sure that this march was important because it raised awareness over a grave and concerning issue. This is also the reason why a lot of Pakistani celebrities believed that attending this movement would be beneficial.

Here are some of the signs that the celebrities who took part in the march, held:

The Pakistani VJ and actress Anoushey Ashraf, participated in the march with an inspirational sign. 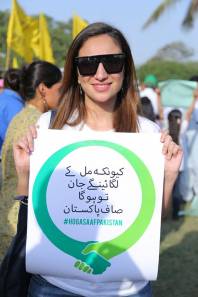 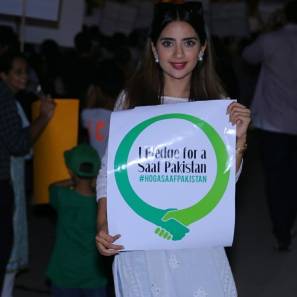 #ClimateChange is real. Denying it doesn’t make it less of a fact. We need to play our part for a cleaner and greener #Pakistan, kyun ke mil ke lagayenge jaan to #hogasaafpakistan #WWF #ClimateMarch

Singer Shehzad Roy also posted about the march on his Instagram.

We can win the race against climate change, but we must #ActNow. Join the movement before the @UN #ClimateAction Summit @climateactionpk #globalclimatestrike #climatemarch

Even though, the topic for the march is relevant and it is necessary to raise awareness about it, there is one thing that has been hypocritical. Basically, the people that attended a march that talked about the dying status of the Earth, littered as the event ended. There were cigarette buds, plastic bottles or bags, and trash, surrounding every space after the event ended. In that regard, it would be great if people actually stuck by their words, and tried to make Pakistan a better place.

What do you think of the situation? Did you attend the climate march in Pakistan? If so, did it go well? Share your thoughts using the links below.