Recently, a Pakistani girl named Ayesha Malik heckled Indian actress Priyanka Chopra during an audience Q&A session at Beautycon in Los Angeles, USA. She accused Priyanka of being a “hypocrite” for tweeting in support of Indian armed forces and “encouraging nuclear war against Pakistan” amid increasing conflict between India and Pakistan in February 2019.

In her tweet on February 2019, Priyanka Chopra said: “Jai Hind” which is the Indian equivalent of our national slogan “Pakistan Zindabad.” Though her tweet came after India claimed that it had done a surgical strike inside Pakistan, this claim was soon refuted by our government with strong evidence in front of the global community.

Priyanka’s tweet was seen by many Pakistanis including Ayesha Malik as her support for a war against Pakistan and because of this reason, many prominent Pakistanis including actress Armeena Khan started a petition to remove Priyanka Chopra from her work as a UNICEF Goodwill ambassador. However, Priyanka hasn’t been removed yet despite thousands of signatures on the petition calling for her removal as well as protests by Pakistan against her such status.

Actor Priyanka Chopra is facing backlash for her comments on the Indian army. pic.twitter.com/KMqrUVwiGl

“Whenever you’re done venting… Got it, done? OK, cool. So, I have many, many friends from Pakistan and I am from India, and war is not something that I am really fond of but I am patriotic. So, I’m sorry if I hurt sentiments to people who do love me and have loved me, but I think that all of us have a sort of middle ground that we all have to walk, just like you probably do as well.”

This reply of hers was seen by many in Pakistan as highly arrogant and condescending and they started trolling her to an extent where some demanded that Hollywood should stop offering her more roles. However, Pakistani blogger Sarmad Iqbal voiced his support for Priyanka instead of turning against Priyanka Chopra and lambasting her. 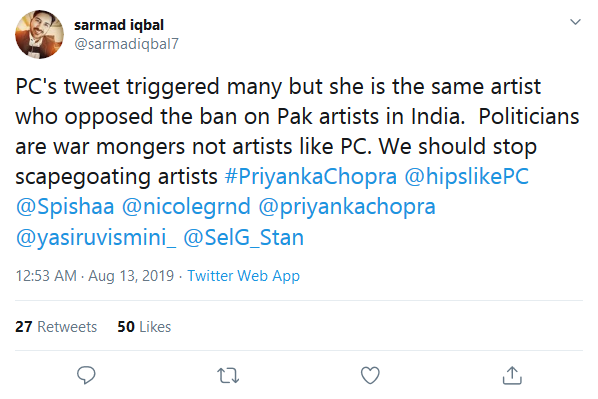 Different people reacted to this tweet in different ways. Some bashed Sarmad for supporting Priyanka.

Some Pakistanis even accused her of being a “Hindu terrorist.”

Many supported Sarmad by retweeting his tweet with along with using words of praise for him and most of these people turned out to be fan accounts and pages of Priyanka Chopra.

Some even retorted to Sarmad’s tweet by saying they aren’t “scapegoating” Priyanka. 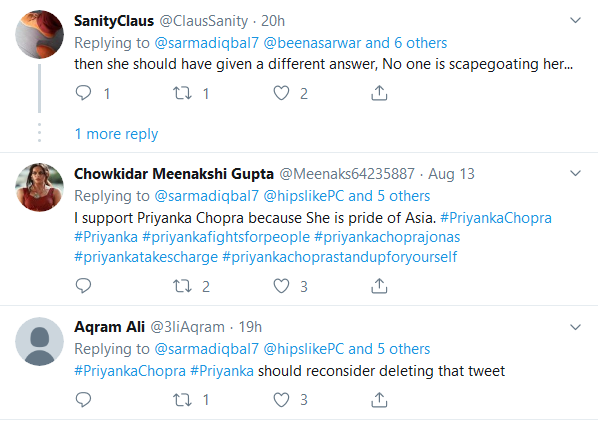 Where many questioned Sarmad why he’s supporting Priyanka despite belonging to Pakistan, some seemed to laud him for doing so.

Sarmad’s tweet was liked and retweeted by renowned Pakistani film-maker and journalist Beena Sarwar as well who is a blue tick twitter user. As of right now, things haven’t really settled with Sarmad’s triggering tweet as supporters and haters of Priyanka continue to slam each other while simultaneously asking Sarmad to support and hate Priyanka.

It seemed as if a mere battle of words wasn’t enough that people started sharing memes against each other with a Priyanka supporter from India sharing a meme mocking Pakistan and a Priyanka hater sharing one mocking her as a UNICEF Goodwill ambassador.

It appears as if Sarmad’s tweet has confused Priyanka’s supporters from India and also simultaneously enraged Priyanka’s Pakistani haters as they expected Sarmad, being a Pakistani blogger, to support Ayesha Malik and lambaste Priyanka. However, Sarmad seems to have done the exact opposite without directly lambasting anyone.

Nonetheless, in his tweet, he’s also made a reference to Priyanka’s support for Pakistani artists in India in the past by saying, “But she is the same artist who opposed the ban on Pak artists in India.” This support came from Priyanka when our Pakistani artists including Mahira Khan and Fawad Khan were banned in India from working in Bollywood films after the Uri attack in Indian occupied Kashmir in 2016. Sarmad clearly wants us, as his fellow citizens, to see a positive side of Priyanka which she demonstrated in the past towards Pakistan.

Blogger Sarmad Iqbal is clearly showing empathy to an artist and not to an “Indian national.”

However, by doing so, he has triggered the ire of some Pakistanis and Priyanka haters. Despite such ire, he remains adamant on his stance which is reflected in the fact that he hasn’t replied to any of the trolls and retweeted only those who have supported his stance on Priyanka.

Do you think Sarmad is right and shouldn’t be slammed for supporting an artist? Does this make him any less of a “patriotic” Pakistani? Let us know your views in the comments section below!

Here’s Why This Guy Thinks It’s Time For Us To Put An End To Child Abuse And Save These Innocent Souls!
Rumors Say SRK Might Choose Fawad Khan For Professor’s Role In Indian Version Of ‘Money Heist’!
To Top