Pakistani blogger, writer and painter, Alyan Khan, has been in the limelight since last year when he first published the article criticizing the snobbish ways of Pakistani elite on the local news site. Since then, his readers seem to grow without fail. Alyan has now turned more aggressive towards bringing about a change and awareness with reportedly publishing articles on Pakistani army and terrorism.

Khan has also been writing a book, according to Google, on history, politics and social issues of the Indian subcontinent, which is believed to be currently being edited by infamous Pakistani journalists and writer, Raza Ahmad Rumi. The book is expected to be published by the end of this year.

Also Read: Meet Syeda Zahra Bokhari – The Youngest Author Who Wrote Her First Book At The Age Of 5!

A little about Alyan’s personal life

Alyan Khan was born on January 4, 2002, in Islamabad, Pakistan. His father, a civil servant, died when he was only 8. He has since then lived with his mother and elder brother in the same city.

Here’s a picture of Alyan with his cat! 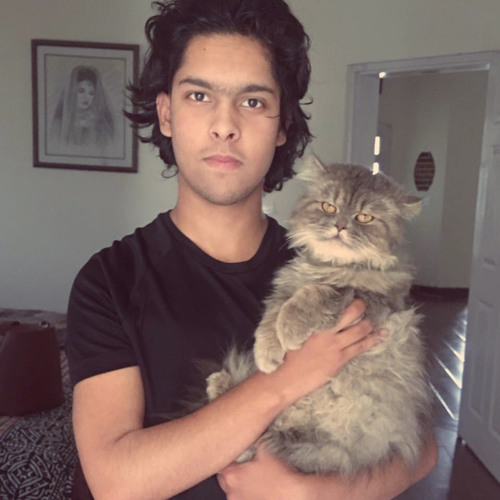 Alyan went to a prestigious government college in Islamabad, ICB, and spent 8 years there. He later joined a Turkish school and completed his higher school education in sciences. Currently, he is doing Humanities privately while perusing his vision.

Bapsi Sidhwa, a Pakistani novelist, on one of Alyan’s articles, reviewed: “His pen has the power to change.”

But recently, his writings have taken some unexpected turns. In one of his latest blogs on the fading culture of Pakistani artists, Alyan explained ‘how the love for deepness and, almost prophetically as being connected, praise for national identity is nothing now it had been when we were oppressed slaves.‘ Furthermore, in one of the paragraphs, he is quoted writing:

“Why is it, that when we were most oppressed, we dreamt, and produced names, writers specifically, like Allama Iqbal, Faiz Ahmad Faiz, Bano Qudsia, Bapsi Sidhwa, Mustansar Hussain Tarar, Anwar Maqsood and many more. While now that we are ‘free’, we are left with the scrap like, far from any offence, Kamila Shamsie, Bina Shah and Mohammed Hanif, none of whom even dare to live in Pakistan or are even educated here, while still proudly use this identity.”

This eventually triggered one of the victims, Bina Shah, a British-Pakistani writer, who tweeted saying:

Hi @4lyanKhan. My primary and secondary school education was in Pakistan, and I've lived in Karachi happily since 1995. @DunyaNews @DunyaBlogs

I mentioned your name along with two other British-Pakistani writers, Kamila Shamsie and Mohammed Hanif. You lived and obtained your education, according to Wikipedia, from outside Pakistan. That's exactly what went into my writing.https://t.co/1KBblyVege@DunyaNews @DunyaBlogs https://t.co/Ma5tkZumi8

No further words were exchanged between the two, yet conflicts seem to persist.

Apart from sociopolitical issues, the young writer has also taken interest in writing about spirituality. In one of his blogs ‘The Game of Life: Your Time Starts Now!’ he writes:

“The suffering of this world balances the peace of that heaven, which may exist, or perhaps resides in our minds — that is where your time ends, realizing it, and the actual life beings, cherishing it.”

According to Google, Alyan’s writing typically covers the analyzations of social and political issues. Issues that are often overlooked by a normal eye, through approaching its root causes.

New talents like Alyan are pillars on which Pakistan will stand tomorrow. We can only wish this young blogger and writer all the best in his life and career, the courage to bear all the criticism and the strength to stand by his vision.

This Guy Believes That There Could Be A Possible Revival Of The Cold War!
Ex-Pakistani HC Abdul Basit Mistook Adult Film Star Johnny Sins For A Kashmiri And Hadh Hogayi!
To Top