Khalil Chishtee is a Pakistani artist based in California who became famous for his peculiar concept, which was ‘plastic bag art’. It might sound unfamiliar or even uninteresting but there is a grand meaning behind his work.

The Impressive Usage Of Plastic Bags: 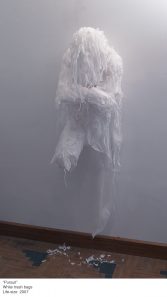 He has an incredible educational background that is easily reflected in his artwork. Moreover, he is one of the artists that Pakistani’s need now.

How can one use plastic bags SO effortlessly to create a piece of art that can touch many?

Chishtee utilizes plastic bags and brings them to life. His sculptures are known for showing the human essence and its existence. The bags that are molded into human beings display the flow-like actions that push a human’s breathe in them. He was inspired to use plastic bags because they are so common and can be found almost anywhere. So, now he uses them to place a life in them.

His sculptures can make you emotional yet keep you sane enough to wonder ‘what even’. People have finally started paying attention to the skillful artist.

Chishtee, belonging to California, has also held solo exhibitions. One of them was in Robert Else Gallery, California, in 2005. And another was in California as well but held in Witt Gallery. Then, in 2007 he decided to go back to his roots to display his artwork in Islamabad, Pakistan in Rohtas Gallery.

He Does Not Want To Be Stuck In A Box:

Chishtee also mentions that he doesn’t dwell over what is done. He stresses that he is more of a present person that appreciates the things in front of him, he said, “whenever one lives in the ‘now’, one discovers oneself”

Right now, he is the next candidate to become an accomplished artist not only in Pakistan but all over South Asia. His work is reaching America and it has inspired many to ponder over unique art styles. Moreover, it will not be unreal to say that he is creating a new genre within art.

Even though Khalil Chishtee’s plastic bag sculptures are a world of their own, however, in an interview with Dawn, he mentioned that he wants to be as versatile as possible, “I’d like to explore all styles and genre. One is born to be free and not to be enslaved by a rigid thought process in the name of clarity”

In addition, Chishtee is a firm believer that art is supposed to be meaningful and caring. It needs to change your life for the better instead of being just a mantle-piece. There is a requirement for art to be impactful, he said, “Art aims at learning how to cope with life. And it can help develop a deep understanding of your own experiences”

Chishtee also seems disappointed with the geniuses who are labeling art in Pakistan, he said, “They do not try to understand others’ views.” He also said, “Art is not a religion. There is nothing right or wrong here.” Chistee wants to be free from this enslavement within the concept of art. 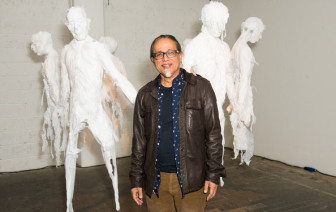 Once again, Chishtee criticizes the mindset in Pakistan, he said “in Pakistan, strange things are happening. Comedians are becoming serious commentators while serious people are becoming comedian” then further adds, “What I mean is that everyone who comes to power pretends to be a savior, but ends up further damaging the country’s moral fabric” His work is precious to him and through the help of it he tries to addresses such issues, “In my work I try and address these issues and comment on them in my own way,” he simply claims.

Despite living in America, Chishtee is still in connection and up-to-date with the country he initially belongs to.

When asked regarding his two identities, he mentioned, “I was a Pakistani before coming to the US, but after coming to America I became a human being” he sums it up with, “Here I am a part of humanity now. I don’t have just one identity.”

Regarding the condition of people in Pakistan, he again addresses, “I am a storyteller. One thing which fascinates me is that everyone wants to become a messiah, but no one can succeed without really going through the grind of hard work” only to add in, “Whenever I work, somehow these thoughts seem to seep into my work without really trying to. These days we keep looking between the lines and always miss the forest for the trees,”

What Is In Store In His Future?

Right now, he is making it big in Brooklyn, New York as an artist along with his wife Ruby Chishtee, who is also an artist. 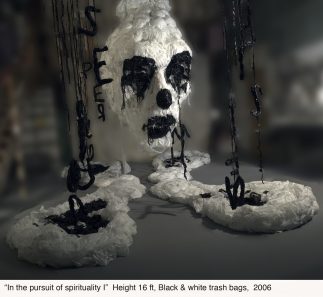 It is observable that Chishtee wants to remain as diverse as possible and is definitely open to experimenting more. This is why he will make it big in the future because he is constantly changing and hence, also improving.

The exciting news is that his artwork will be reaching Pakistan in October at Sannat Gallery, Karachi. Moreover, he will also be displaying his work in an exhibition held in Chicago. Sadly enough, there are quite a lot of people in Pakistan that still don’t follow his sculptures and thought-provoking art style and that needs to change! Pakistan finally has an artist that is officially changing the art game not locally but internationally. We need to show support and remain open to such hidden gems.

Did you know about Khalil Chishtee and its interesting legacy? Will people in Pakistan finally pay attention to an artist that has been underrated for years? Share your thoughts.

How Major General Nigar Johar Khan Will Always Be Pakistan’s Pride
Shahbaz Sharif’s Car Hit A Disabled PMLN Worker Outside Kot Lakhpat Jail And This Is Not The First Time!
To Top