The entertainment industry of Pakistan is truly entertaining the masses these days. Its a season of film releases but the ‘personal dramas’ of various personalities associated with the industry are not looking toward an end. It looks like the exposing phase was not enough to hook people to the scenario as now, a banning fiasco has started between the on-screen and off-screen television fraternity.

Last month, the veteran artist of the industry Firdous Jamal was invited on Faysal Qureshi’s morning show along with some other guests. While being engaged in a segment where the guests were shown pictures of different Pakistani actors, Firdous Jamal had nothing good to say about the star Mahira Khan and it started a debate on social media. The majority seemed to be in favor of the actor’s comments while some labeled them ‘sexist’ and ‘misogynist.’

Here’s what Momina Duraid has to say on the matter! 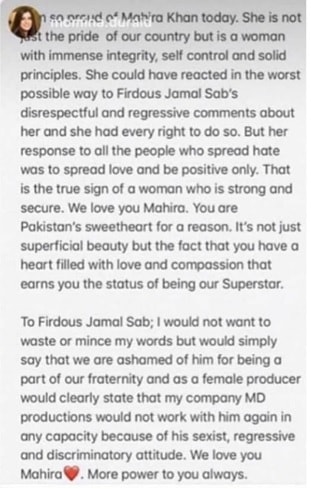 As the statement from Momina Duraid came out, a roar of opinions started on social platforms and #SupportFirdousJamal started trending on Twitter. Several celebrities also pooled in and showed the utmost support for the iconic Firdous Jamal. Shaan Shahid, Feroze Khan and the extremely talented veteran Jamal Shah posted their favorable opinions for the actor.

Feroze Khan provoked Momina Duraid to cancel him too!

– my question … is this what freedom of speech gets you ?! Getting someone’s bread and butter cancelled ?? If it does … then I want every single bastard out there bashing any human being on the internet get cancelled the same way !! Coz you can’t ! 🙂 Enough is enough ! Get up before you’re next ! #ShowMeIfYouCanCancelMe 😂😂😂 jokes !!!

#Letsbringourprideback🇵🇰 an artist lives in his own zone, he speaks a different language, his choice of words might be hated , but his endless dedication to his work & his brilliance in acting can never be disrespected. #livinglegend #halloffame #forgiveforgetmoveon 🙏🏼🇵🇰❤️ pic.twitter.com/l7VaiOWsHw

Legendary Jamal Shah tweeted a sane solution to the matter!

I condemn Momina’s irrational decision against Ferdaus Jamal.I also believe,no one has the right to suggest what Maira khan should be doing bt artists r mature enough to resolve issues among themselves.If the decision is not taken back,I will never work for MD productions

It is believed that after Momina Duraid’s post faced sheer criticism and hatred, she deleted it. In the midst of such uproar on the matter, neither Firdous Jamal has released any statement nor Mahira Khan has said anything till now. Currently, the tables seem to be turned in Firdous Jamal’s favor and Pakistanis are hoping that the issue will be solved with maturity and sanity soon.

Who are you favoring? Let us know in the comments below!

Joint-Opposition Embarrassed After Senate Chairman Gaffe, Start Blaming Armed Institutions Of Pakistan!
A Young Pakistani Girl Tied The Knot With Her Hindu Partner In This Viral ‘Same-Sex’ Marriage!
To Top