The cricket craze in Pakistan is yet again on the rise as Pakistan Super League (PSL)’s fifth edition is right around the corner. From the drafting of players to the announcement of the final date, the preparations seem to be going on the right pace. Well, currently, the national cricketers are adding more spice as they respond to each other’s challenges for the upcoming PSL 5 on social media.

Pakistani cricketers challenge each other for PSL 5!

Since the first season of the event, PCB has found some of the most talented cricketing gems across Pakistan. Certainly, with the hype, last month, Pakistan International Airlines (PIA) became the official ‘flying‘ partner for Karachi Kings. Going along, recently, Pakistan’s well-known cricket stars replied to each other’s challenges for the PSL 5 and definitely, the game is on.

Check out what the cricket stars have to say!

Undoubtedly, PSL has tasted success with each passing year and with each ending season with a lot more to offer. However, Pakistan’s favorite players seem to be on a roll and completely ready as they challenge each other for the most-awaited face-off. As of now, a compiled video of cricket stars is circulating on the internet and the nation is thrilled and exhilarated.

Fakhar Zaman and others, ready for the big event!

Beginning with batsman Fakhar Zaman, the clip holds responses from each competing cricketer ready to take on the other. Moreover, the video has bowler Hasan Ali, national T20I captain Babar Azam and all-rounder Shadab Khan. Apparently, the cricketers displayed their high spirits and confident attitude to boost the excitement and seem ready to become victorious. 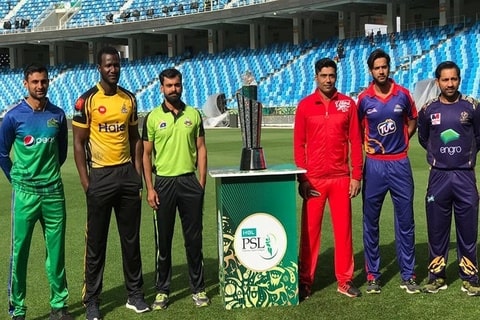 With each ending season, PSL has gained more fame and viewership and the numbers are consistently going up. With six known franchises on board, PSL 5 will surely fulfill ever cricket fan’s wish commencing this month. As per PCB’s decision, this year every single match of PSL will take place on grounds all across Pakistan, no neutral venue.

All PSL 5 matches to be played in Pakistan!

Particularly, all the matches are scheduled in the four big cities of Pakistan with Lahore hosting the most battles. Starting on 20th January in Lahore’s Qaddafi Stadium, the event will then will move forward as per the decided schedule. A total of 13 matches will be played in Lahore, 9 matches in Karachi’s National Stadium, 8 in Rawalpindi’s Pindi Stadium and 4 in Multan’s Multan Cricket Ground. It won’t be wrong to say that this year’s PSL is full of shocks and surprises as some decisions portray. However, this time, a ‘pugam’ decided who gets first pick in PSL 5 drafting and the news went instantly viral on social media. Well, as of now, Pakistanis are eagerly waiting to see their favorite cricketers play in the fifth season of PSL.

What do you think of the video? Let us know in the comments section below!