Pakistan has become a permanent member of the Shanghai Cooperation Organisation (SCO) Youth Council. Usman Dar, the Special Assistant to Prime Minister (SAPM) on Youth Affairs, shared the news in a video.

Usman in his video statement said that it is the efforts of Prime Minister Imran Khan that have led to Pakistan’s agreement to the SCO Youth Council. According to him, all this became possible due to the prime minister who set up the country’s first youth council. Such as launching initiatives like Kamyab Jawan and Hunarmand Pakistan programs for the welfare of youth.

How the SCO Youth Council came into existence?

The Youth Council of SCO formed after the Russian President Vladimir Putin made a proposal at the SCO summit in June 2006. Moreover, in May 2007, the entire concept of the Council was represented at a meeting of the SCO heads of state in Beijing.

Furthermore, the SCO meeting took place in October 2008 in St. Petersburg. In this meeting, an agreement was made between the Youth Council’s statutes and the basic principles of operation. Currently, China is the president of the SCO Council. Every year, an SCO summit is held in China where young representatives of member countries participate.

In addition to this, Russia, China, Kyrgyz Republic, Kazakhstan, Tajikistan, and Uzbekistan are the founding members of the SCO Youth Council. The association has become a significant group of countries with emerging economies.

A gate of opportunities open for the Pakistani youth

According to Usman, the youth of Pakistan will now be able to represent their country at SCO Youth Council meetings. Not only that but also the exchange programs. In the video, he further talks about how the youth can also take part in the skill development programs of the SCO Youth Council. 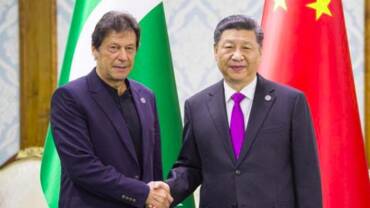 The youth is now given the opportunity to get greatly benefitted from international exposure. Needless to say, it will surely help in their socio-economic development.

Pakistan’s appointment in the SCO Youth Council became possible solely because of the reforms the Prime Minister Imran Khan instituted for the past two years. Hence, we can completely agree with what Usman has stated in his video. It is the efforts of the Prime Minister which have proved to be fruitful today.

Here’s How Actor Aagha Ali Reacted To Sarah-Falak Wedding
This Girl Shares Her Experience Of Being Tested Positive For COVID-19!
To Top