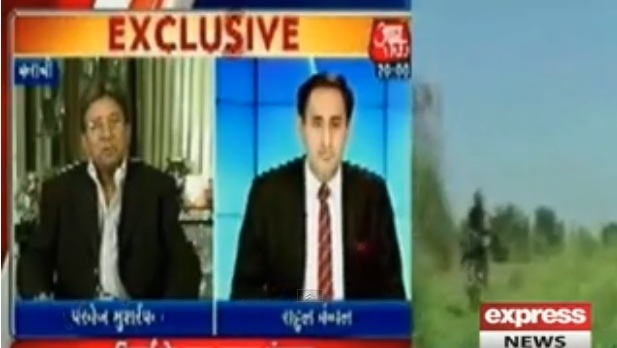 The ex president of Pakistan, Pervez Musharraf reprimanded India’s media for creating and manipulating false stories against the armed forces of Pakistan.

Talking on Indian TV channel, Musharraf said India was manufacturing false stories to give Pakistan’s armed force and ISI in bad name through its media.

Pervaiz Musharraf is a retired four-star general and a lawmaker of Pakistan who seized power through a military overthrow in 1999. He served as the tenth President of Pakistan from 2001 until 2008. Before that, he was the thirteenth Chief of Army Staff from October 1998 until November 2007, and was likewise the tenth Chairman of the Joint Chiefs of Staff Committee of Pakistan Armed Forces from 1998 until 2001.

Appointed by the Pakistan Army in 1964, Musharraf rose to national attention in the wake of being selected a four-star general in October 1998 by the Prime Minister of that time, Mian Nawaz Sharif. Pervaiz Musharraf was the driving force and key field commander behind the Kargil invasion. At one time, Pervaiz Musharraf assumed a fundamental part in the civil war of Afghan, both helping the peace transactions and endeavoring to end the carnage in the country.

After months of tensed relations with Prime Minister Sharif, Pervaiz Musharraf was brought to power through a military rebellion in 1999, accordingly setting the Prime Minister under a strict house-capture before moving him to Adiala Jail in Punjab Province.