The Striking Similarities Between The 1992 And 2019 ICC World Cup Has Left Everyone In A Shock!

Pakistan Cricket Team in the 1992 World Cup were being called the “Cornered Tigers” because of their exceptional comeback after the initial losses. The incumbent Prime Minister of Pakistan Imran Khan was the leader of the pack back then and his captaincy helped Pakistan in bringing the trophy home. The scenes, the craze at that time when the trophy was lifted by Kaptaan, Pakistanis can still live that moment through pictures. 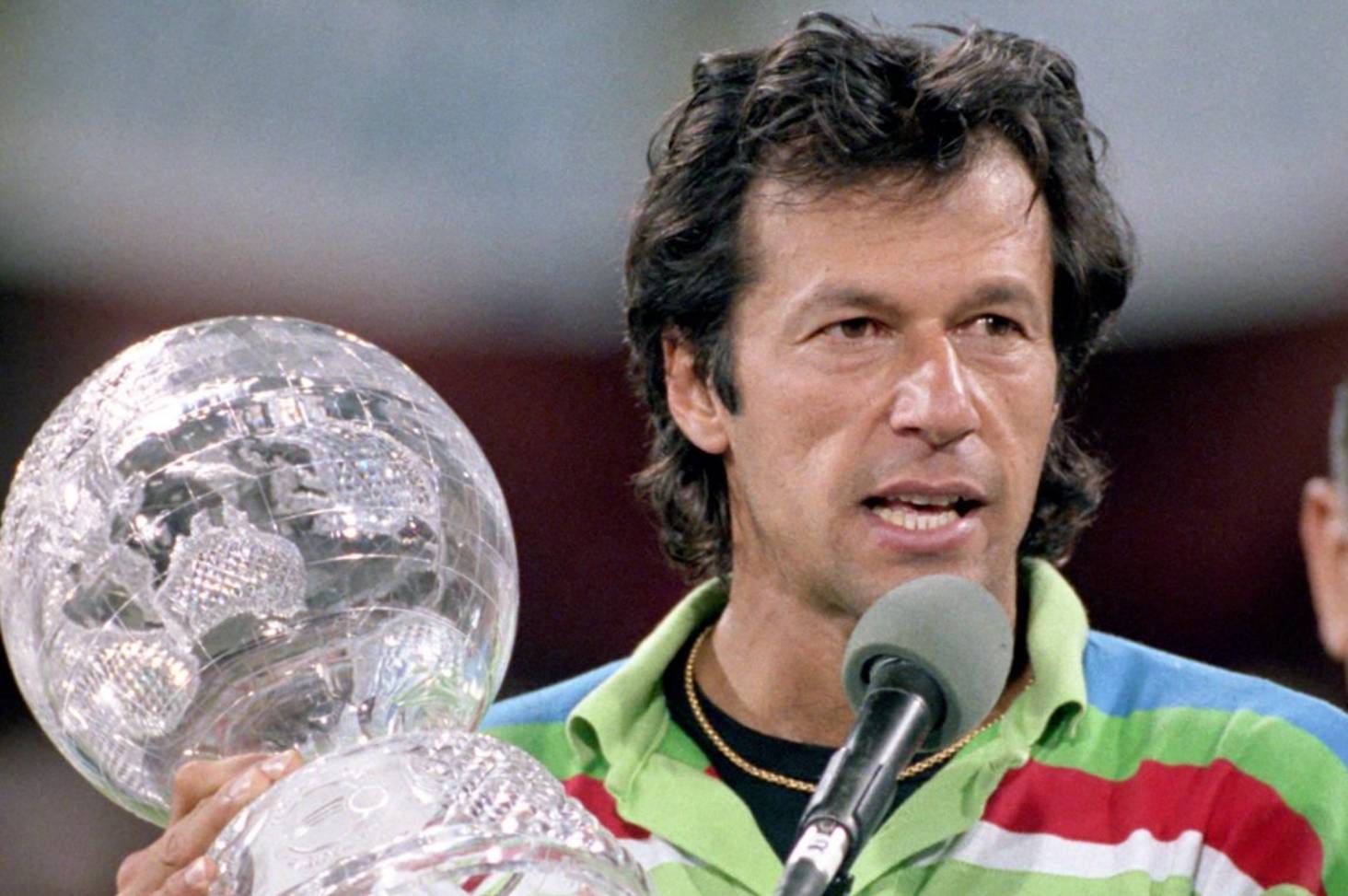 This year’s ICC Cricket World Cup has stirred quite a debate among cricket fans for all the right reasons. Imran Khan lead Pakistan win in the 1992 World Cup is being widely compared to this year’s Pakistan Cricket Team situation. The uncanny similarities between both the teams and the win/loss ratio up till now are making Pakistani fans hopeful for the trophy this year.

Also read: CWC19: History Is Repeating Itself And The Whole Nation Is Cheering ’92 Ka World Cup

A trip down memory lane: Captains of all 9 times playing the World Cup in 1992! 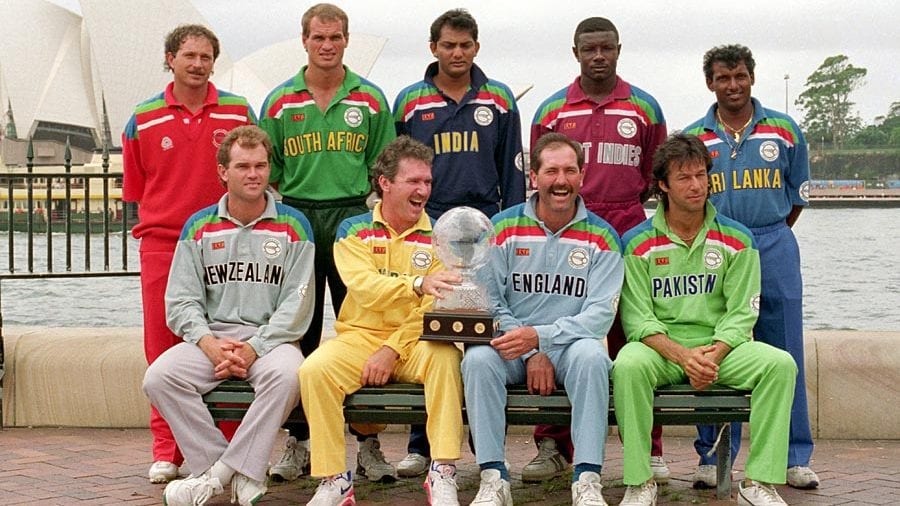 Coming back to present: Captains of all 10 teams playing this year’s World Cup! 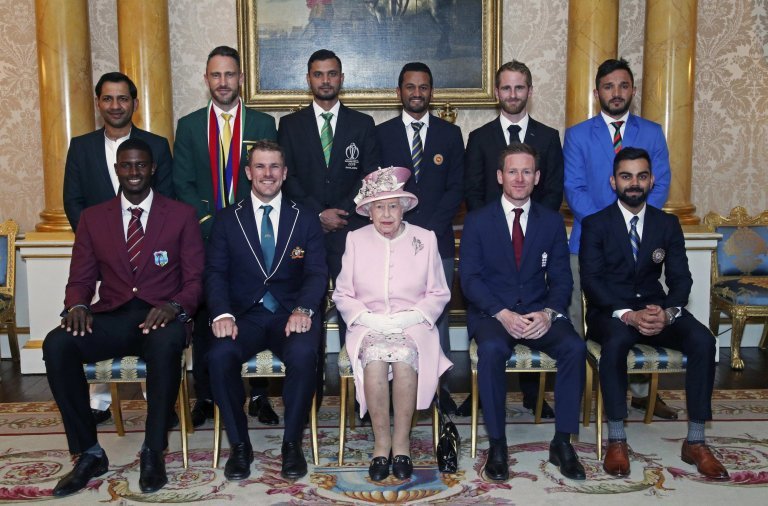 At first, Sarfraz Ahmed lead Pakistan Cricket Team was being criticized and humiliated over the internet for their poor performance. Pakistani fans showed sheer disappointment in their team after the incurred losses in the start but it all went down the drain as the comparison with the Pakistan win of 1992 started pouring in.

Is history really repeating itself?

Well, the results of Pakistan Cricket Team till now is giving a major adrenaline rush to the Cricket fans. Exact same teams and exact same win/loss ratio as the 1992 World Cup is literally giving goosebumps to the cricket lovers. Back in 1992, Pakistan lost their first match against West Indies, the same happened this year too.

Then it was Pakistan VS England and Sarfraz Ahmed’s team won the match, same as 1992. The third match was with Sri Lanka which was interrupted due to rain in 1992 and the same thing happened this year too, rained out. Pakistan then lost against Australia like 1992. The rivalry battle against India was lost by Pakistan in 1992 and it was repeated this year too.

Struggling to make it to the semis in 1992, Pakistan had to win against the further four teams which they did and it is happening yet again, Pakistan won against South Africa and yesterday from New Zealand which was unbeaten till now.

These 7 matches played by Pakistan literally shows how the 1992 World Cup is repeating itself.

Check out the chart below! 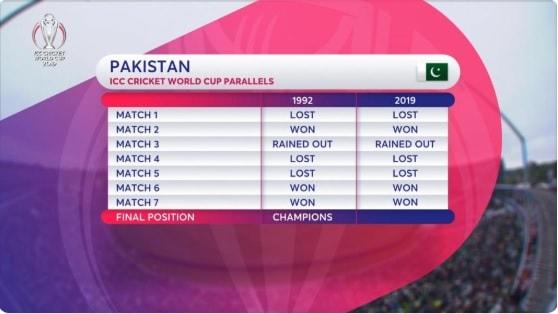 Till now, the score charts are maintaining the hope of Pakistani cricket fans. This got so viral that even the comparison between Pakistan’s both World Cups was shown during the match against New Zealand on Wednesday. Hope are high that Pakistan will make it happen this time Insha Allah!

Want to add something to the story? Write to us in the comments below!

Afghan President Ashraf Ghani Arrives In Pakistan For Two-Day Visit
Nadia Jamil Was Offered A Role Next To Shahrukh Khan In Veer Zaara And This Is Some Serious Revelation!
To Top