Pakistan: Nawaz Sharif Made this Little Boy Cry Like Hell! - 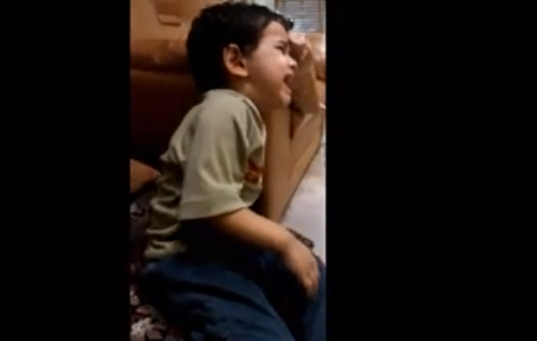 With the rising popularity of Pakistan Tehreek e Insaaf (PTI), Imran Khan has become a hero for Pakistan and the kids in Pakistan. Hence, just the mention of Nawaz Sharif made this child burst into tears.

Apparently, the ‘Go Nawaz Go’ campaign is working really well for Imran Khan and his party, Pakistan Tehreek e Insaaf (PTI), as many people have started resenting the current prime minister, Mr. Nawaz Sharif and people across all the age groups are chanting against him.

From senior citizens to teenagers, from women to children and men, everyone became a part of this campaign in no time and not only in Pakistan, ‘Go Nawaz Go’ campaign gained popularity all over the world. People are recording their chants and posting their videos from all across the globe.

The phrase ‘Bacahay Gair Siyasi Hotay Hain’ (Kids are non political) stands no more true for the kids in Pakistan. They are well aware of the current political scenario of Pakistan and have picked up their favorite politicians. Many of the kids in Pakistan have started having their own opinion.

Despite of the efforts of their parents to neutralize their stance, they stick to their favorite political party of Pakistan.  Gone are the days when parents used to tell their kids what’s and who is right and who is wrong and their kids used to follow them blindly.

The kids in Pakistan today are very well informed, form their judgments and make their own decisions. As far as the politics is concerned they have selected their clear favorites and no one on earth can influence their thinking or opinion.

Well, it is a good sign for any progressive nation, but is it a good sign for the current governing party? Only time will tell. As for now, enjoy this video and brace yourself to get amazed as to how politically active kids in Pakistan have now become!