Pakistan Must Invest Rs6.5 Trillion In 10 Years to Educate Every Out-Of-School Girl

A new report, “Bringing All the Girls to School – A Case for Investment,” jointly published by a group of civil society organizations working on girls’ right to education in Pakistan states that the government will have to make an investment to the tune of Rs. 6.5 trillion to ensure that every out-of-school (OOS) girl in the country has access to formal education by the year 2030. To ensure that the entire population of all the out-of-school children in Pakistan, girls and boys, are in schools another Rs. 5.5 trillion will have to be invested in the education sector over the next 10 years.

It is interesting to note that between 2012-13 to 2018-19, the federal and provincial governments in Pakistan collectively spent Rs. 6 trillion on education. As per the projections provided in the report, this amount will merely have to doubled over a ten-year period to achieve hundred per cent literacy in the country. 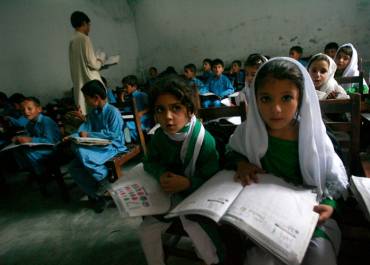 At present, 22.8 million or 44% of Pakistan’s children of school-going age (i.e. 5 – 16 years) are out of schools. The majority of these out-of-school children are girls. This inevitably means that Pakistan can possibly not overcome its current education crises without ensuring formal learning opportunities for its girl-children.

Over the period of the last five years from 2012-13 to 2016-17, the number of out-of-school children (boys and girls) has declined by approximately 12 per cent. The report asserts that at this rate of change, it would take Pakistan another 42 years to clear the existing backlog of OOS children in the country!

Both demand- and structural supply-side issues coupled with spasmodic planning have contributed to the current grim situation of education in Pakistan. However, while these predicaments individually and in unison persistently rob millions of Pakistani children from a chance at a better life, at the heart of Pakistan’s education crises lies the dilemma of dreadfully low investment.

Pakistan is a signatory to the “Education 2030 Incheon Declaration and Framework for Action 2015” according to which every country should spend at least 4 per cent of its GDP on education and/or allocate at least 15 to 20 per cent of its public expenditure for education. However, as highlighted in the report while the provincial governments have been allocating well above the minimum limit of 15 per cent throughout this time, the federal government has fallen short of the mark by a huge margin with allocations dwindling between a mere 2 – 2.2. per cent! And so, even though education is primarily a provincial subject, the onus of the responsibility to correct Pakistan’s current miserable state of education spending as a percentage of its GDP lies largely on the federal government. Because the federal spending on education as a percentage of the total spending is so low, it inevitably brings down the cumulative average of the country.

The study also takes into account the adverse effect the COVID-19 outbreak is likely to have on Pakistan’s already frail economy and how the recovery phase can be accelerated to minimize its spill-over on the education system.

After highlighting the state of Pakistan’s current investment in education, “Bringing All the Girls to School – A Case for Investment,” concludes with a detailed roadmap on how the structural rigidities within the country’s economic system can be addressed and more revenue generated – in the short-, medium- and long-term periods – to raise the required Rs. 6.5 trillion over by 2030 to educate the country’s over 12 million out-of-school girls.