On 15th August 1947, India too was capable to get its freedom from the chains of slavery at the hands of the British Empire. However, India might have succeeded in many things their ability to twist the truth. Besides making dramatic moves is their special talent anyway. Apart from this, the country also manages to either turn a blind eye or actually be just that hypocritical. Now as Indians celebrate their 74th Independence day, they still manage to be deprive Indian-Occupied Kashmir (IOK) of their basic rights.

It is indeed sad to see that with 74 years of Independence that India claims to celebrate; there have been about 74 years of oppression, hardships, and unnecessary atrocities for Kashmiris in IOK.

Despite the continuous arbitration of the United Nations, the Indian government fails to look at the situation with a humane eye. The country’s government officials are still focused on making the lives of Kashmiri people miserable. 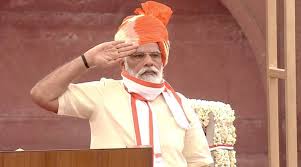 Taking a look at Twitter, it could be seen how the Indian public is unaware of these atrocities or maybe they are too insensitive and hypocritical to even care about it in the long run.

Amidst curfew and internet shutdown in Valley, India celebrates it's Independence Day. Even on the day of Independence they deny Kashmiris the "Basic Rights & Liberties".
This shows why Kashmir will never be an integral part of India but a forcibly occupied territory.

While some address the situation full force, there are many who are feeling saddened to see how horribly the situation in Kashmir fails and humanity dies brutally with every life that is lost.

As a matter of fact, what is far worse is how India also killed and martyred three Pakistani soldiers along the LoC on Thursday. Simultaneously, the country continues to make it difficult for Muslims residing within India to live also.

Three Pakistani soldiers were martyred in unprovoked ENDian firing along the Line of Control (LoC) on Thursday,as Pakistanis marked Aug 15 the independence day of India as a black day across the country.#15AugustBlackDay@ShakirGujjar44@Junglie_Billi@Positvesoul_

15 August Black Day As BLACK as his Heart & his Soul & his Face because Of Killings,
We observe it as A BLACK DAY!#15AugustBlackDay
Modi’s India’s Independence Day is a BLACK DAY for all those who are Humane & who oppose human right abuses in Kashmir. pic.twitter.com/TCoNdHYneI

With hundreds of lives sacrificed it is very devastating to see that Indian media claims to put the blame Pakistan in the go. We know the audacity and humanity both are taking a serious hit when it comes to India.

In addition to that, what we find most repulsive is how the Indian Army brutally murders innocent civilians in IOK. Yet they state with a straight face that they were eliminating terrorism.

We wonder when the Indian brutality will come to an end? Will the poor Kashmiris ever be given a right to breathe the air of freedom and peace or will they always be deprived of it?

Today Pakistanis support Kashmir’s stance to mark 15th August as the Black Day; because what Indians celebrate as independence is a slap in the face of every Kashmiri who fears to sleep at night.

We wish and pray for the lives of Kashmiris and hope that they get the freedom they deserve real soon. We pray and support the Kashmiris for their struggles and pray that they also get a chance to breathe freely. Without the oppression that they have been suffering for 74 years.

Turkey Hints At Suspending Diplomatic Ties With UAE After Its Deal With Israel
Imtiaz Takes Retail Game To The Next-Level With A New Logo, Vision And New Branches
To Top